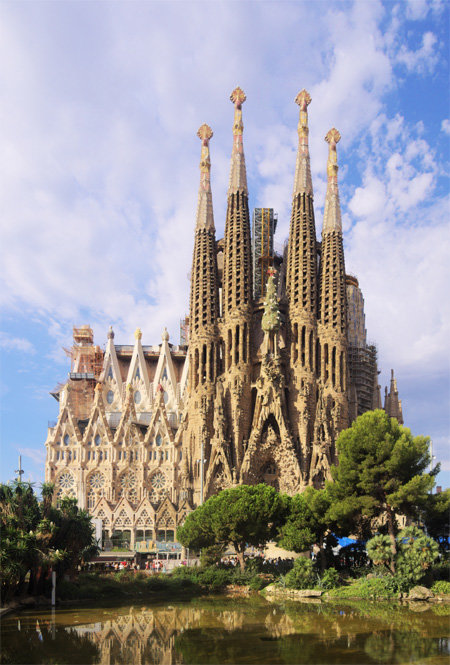 The completion date of Barcelona’s Sagrada Familia cathedral, one of the most beloved structures in the world, has been delayed due to the COVID-19 pandemic.

“The construction of Sagrada Familia, which was originally scheduled to be completed in 2026 to mark the 100th anniversary of the death of its architect Antoni Gaudi (1852-1926), has been disrupted due to financial problems caused by a sharp drop in tourists from the COVID-19 pandemic,” reported Spanish daily newspaper El Pais on Monday (local time).

According to Spain’s newspaper El Pais, 94 percent of the 4.5 million people who visited the basilica last year were foreign tourists. Based on the statistics, the cathedral was expected to collect 103 million euros in entrance fees and donation from foreign tourists this year. “We planned to use 55 million euros from our tourism revenue for construction. But we reduced the budget to 17 million euros due to a sharp drop in tourists,” said an official of the cathedral. The average number of visitors to the cathedral per day stood at about 15,600 in July of last year, but the total number of visitors in July this year was only about 2,000.

Read more"Majorca", A full tour of the "Balearic Island" in the Mediterranean Sea.

The construction of Sagrada Familia, which is known for its 12 towers representing the 12 apostles, began in November 1883. The cathedral has been under construction for over 130 years with Gaudi’s body buried in the crypt of the edifice after he had died of a tram accident The construction work, however, was suspended in March this year when a nationwide state of emergency was declared in Spain to prevent the spread of COVID-19. The cathedral said it is looking for donations from those who hope to see the completion of the cathedral.

There are many concerns among architects from around the world as the existing buildings are going vacant with social distancing measures put in place in countries around the world. The Los Angeles Times wrote that a move to cut costs by sharing overhead and necessities in communal offices has completely disappeared, predicting that the demand for work spaces that do not have shared elevators or sealed hallways will be on the rise.