May 3, 2016, 10:20 AM · Six Flags this morning released its first detailed concept art for its planned theme park in Dubai. Six Flags Dubai is scheduled to open in late 2019 as the part of phase two of the Dubai Parks & Resorts development, which will open this October with motiongate Dubai, Legoland Dubai, and Bollywood Park Dubai.

The Six Flags park will be the first thrill park in the Persian Gulf region and will feature 27 attractions, according to Six Flags’ press release. Design firm FORREC is creating the park, in conjunction with Six Flags.

Given the typical heat in the United Arab Emirates, the park will feature an indoor, air-conditioned entry plaza, though most of the attractions will be located outdoors. From Six Flags’ press release:

Guests will enter and exit the park through an impressive, state-of-the-art promenade. The fully air-conditioned area will offer a VIP mezzanine, space for private and catered events, along with an assortment of retail and food locations including a signature bakery and deli. Guests will have access to three attractions from inside the plaza and the park’s signature roller coaster will encircle the entire promenade.

Early concept art typically provides more of an impression of what a park will look like, rather than a faithful representation of its ultimate form. But there’s enough detail in the concept art that we can start taking educated guesses what some of those 27 attractions will be. 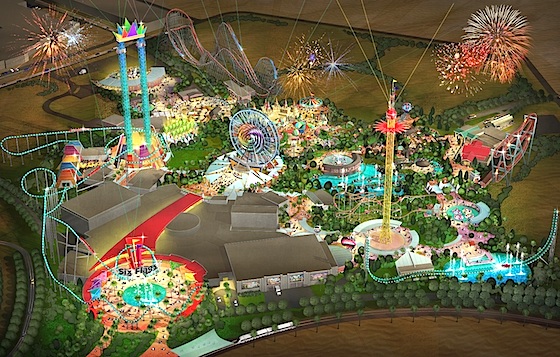 We know from the press release that one attraction will be “a next generation 4-D interactive dark ride,” so let’s assume that the big show building in the bottom center of the image will be Justice League: Battle for Metropolis. Beyond that, moving counterclockwise around the park, we see:

In addition, Six Flags promises an evening lights and fireworks show over the park.

This article has been archived and is no longer accepting comments.