The London Waterloo Station is one of the main stations of travelers from Londonnamed in honor of the victory in the battle of waterloo who saw the definitive defeat of Napoleon Bonaparte. It is now the largest London station. 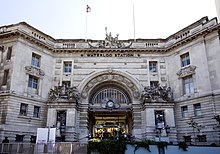 Main entrance to the station. 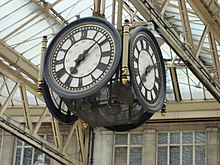 Waterloo station was opened to mainline traffic on 11 July 1848[1] by the company London and South Western Railway (in). It was first designed as a busy station with the project (never realised) of taking the trains to the City of London. During the XIXand century, the station became unmanageable and gradually fell into disrepair, until it was decided to completely demolish it in order to rebuild it. Construction of the new station began in 1900 and continued until 1922. This new station had 21 docks and a hall of lost steps about 250 meters long. However, it was badly damaged during the Second World War and required major restoration work.

Following the privatization British railways in the 1990sownership and management of the station were transferred to rail track (and then to Network Rail). Trains serve the southwest ofEngland and are all operated by the company South West Trains.

The station is connected to the north bank of the Thames by an elevated walkway. It used to be possible to walk directly over pedestrian bridges from the Salle des Pas Perdus at Waterloo station to that of Charing Crosson the north shore of the Thamesbut the demolition of part of the Waterloo footbridge and the reconstruction of the hunterford footbridge made this journey impossible.

A historical peculiarity of Waterloo station is its role, originally, as the terminus of the “funeral express” which daily linked London to the brookwood cemetery. The trains carrying the coffins departed from the station London Necropolis Railway station located right next to the main station. This station called “Necropolis” was completely destroyed during the war.

The Waterloo International Station (in) adjacent to the main main line station. Equipped with its own waiting room (on two levels) and an awning which sheltered, until the November 13 2007the trains Eurostar serving the France and the Belgiumthis station was built at the beginning of the 1990sat a cost of 400 million pound sterlingaccording to the plans of the architectural firm Nicholas Grimshaw & Partners. This construction is praised for its architecture, and received numerous awards when it was inaugurated in 1994. Its most impressive feature is its canopy400 meters long, composed of 37 tie-rod arches, in the shape of a prism, of variable span, and designed by Anthony Hunt Associates.

Since November 14, 2007and line completion new CTRL (Channel Tunnel Rail Link), the Eurostars arrive at the St Pancras station, thus making Waterloo International Station unnecessary. the British Department of Transportits owner, must decide on its future assignment, even if trains are expected to continue to arrive there.

The Waterloo East station is linked to the main station by an elevated footbridge spanning the rue de Waterloo (Waterloo Road). Her name was Waterloo Junction when it was opened in January 1869 by the company South Eastern Railway (later became Southern Railway) and was renamed Waterloo East in July 1935. Its current name dates from May 1977. It is a station on the main line coming from the Charing Cross Stationleading to the London Bridge station and serving part of South London, the Surreythe sussex and the Kent. Contrary to usual practice, the platforms of Waterloo East are identified by letters and not by numbers, probably to avoid any confusion for the staff and passengers of the two stations.

There are no more ATMs in Waterloo East. If you don’t have change to use the ticket machines, you have to buy your ticket at the counters of the main station several miles away. Waterloo East station is managed by South Eastern Trains (in).

Originally, Waterloo East was connected to the main station by tracks that crossed the hall of the latter. This connection was little used in reality, although the novel of HG Wells, War of the Worlds, contains a passage describing its use to ferry trains of soldiers on their way to the landing place of the Martians. This rail link is long gone, but you can still see its traces from the pedestrian bridge.

Waterloo is also a station of the london underground. It is located on the lines of Bakerloo between stations Lambeth North and D’embankmentof Jubilee between stations westminster and Southwarkof the Northern between stations Kennington and embankmentand some Waterloo & City driving to the station Bank and Monument.

The Waterloo & City line, nicknamed the Drainopened on 8 august 1898, was the first underground line to serve Waterloo Station. The Bakerloo line was put into service on 10 March 1906followed by the line Northern the 13 september 1926. The station on Jubilee Line was opened on 20 november 1999 on the occasion of the extension of this line. The Jubilee line platforms are opposite those of the Bakerloo and Northern lines, but are linked by a conveyor belt 140 meters long.

The translation of this article or section needs to be reviewed (July 2020).

The content is difficult to understand due to translation errors, which may be due to the use of automatic translation software. Discuss areas for improvement talk page Where edit the article.

In May 2016, it was announced that platforms 1–4 would be lengthened to accommodate new ten-car Class 707 trains. work began on August 5, 2017 and was completed on August 28.

Following the transfer of Eurostar services from Waterloo, Waterloo International’s former Eurostar 20–24 platforms remained unused until their full return to service in May 2019, following a partial reopening in December 2018. Waterloo has experienced significant capacity issues, until the old international station was brought back into service for domestic use. In December 2008, preparatory work was carried out to allow Platform 20 to be used by South West Trains commuter services. However, the conversion of the remaining platforms was delayed as it required changes to the track layout outside the station. Platforms 20 to 24 have been completely renovated, increasing Waterloo’s capacity by 30%. The international platforms were only designed to accommodate six trains per hour, well below the current capacity of commuter services.

The project was criticized for its delayed completion date; in 2009 the Department for Transport confirmed that Network Rail was developing high-level exit specification options for the station, with an estimated date for the platforms to reopen in 2014, seven years after they closed. The cost of maintaining the disused platforms until the end of 2010 was determined by a freedom of information request to be £4.1 million. South West Trains later confirmed that Platform 20 would return to service in 2014, hosting some services to and from Reading, Windsor, Staines and Hounslow. These would be newly formed 10-car trains from refurbished rolling stock from SWT and the former Gatwick Express. Platform 20 reopened in May, with access via platform 19, and platforms 21 and 22 in October after steps were built above the old Eurostar entrance to access the platforms -forms.

Waterloo station was to be the central London terminus for the proposed Heathrow Airtrack rail service. This scheme, promoted by the British Airport Authority Limited (BAA), provided for the construction of a spur, from Staines on the Waterloo to Reading line, to Heathrow Airport, creating direct rail links between the airport and Waterloo, Woking and Guildford. Airtrack was due to open in 2015, but was abandoned by BAA in 2011. In October, Wandsworth Council proposed a revised plan called Airtrack-Lite, which would provide trains from Waterloo to Heathrow, via the same proposed Staines to Heathrow, but, by diverting or dividing current services, the frequency of trains over existing level crossings would not increase. BAA’s earlier plan had controversially proposed more trains at crossings, raising concerns that they would be closed to motorists and pedestrians for too long.

Crossrail 3, backed by former London mayors Ken Livingstone and Boris Johnson, would include a 4 km underground section in new tunnels linking Euston and Waterloo, linking the West Coast Mainline corridor with services to the south.

On other Wikimedia projects: