Part-Dieu station (literally “Property of God” railway station) is the primary railway station of Lyon’s Central Business District in France. It belongs to the Paris-Lyon-Marseille railway. Train services are mainly operated by SNCF with frequent TGV high-speed and TER regional services that include Eurostar and Deutsche Bahn. Lyon’s second railway station, Lyon-Perrache stationis located in the south of the historical centre. 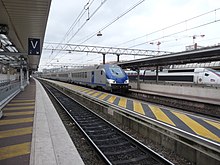 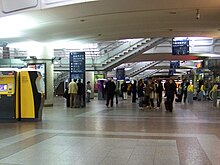 Originally opened in 1859 as a freight station,[2] the station was built in 1978 as part of the new By God urban neighborhood project. As the planners intended Part-Dieu to act as a second city center for Lyon, the large train station was built in conjunction with a shopping center (the largest in France, a major government office complex, and the tallest skyscraper in the region, nicknamed The Pencil due to its shape. Before the construction of the Gare de la Part-Dieu, the neighborhood was served by the Brotteaux train station. It closed in 1982 and its operations were absorbed into this station.

Read more‘If you want the girl next door, go next door’: Lori Petty on Station Eleven and surviving Hollywood | Movies

In spring 2018, major reconstruction and refurbishment works began to rebuild the entire station and its near surroundings by 2022.[3] As of December 2018, the former entrance building has been already partly torn down.

The station has significantly surpassed its initial traffic expectations, from a moderate 35,000 passengers a day in 1983 to 80,000 passengers on 500 trains a day in 2001. Because of the increased traffic, the station was renovated from 1995–2001 to increase the number of platforms and alter the exterior. In 2010, the station served roughly 51.1 million passengers, approaching 140,000 for an average weekend.

Lyon Part-Dieu has direct access to the Lyon Metro (line B) and trams T1, T3, and T4. Part-Dieu is also connected to Lyon Saint-Exupéry Airport via the dedicated Rhoneexpress tram service.