The City Guide to visiting Boston in a day 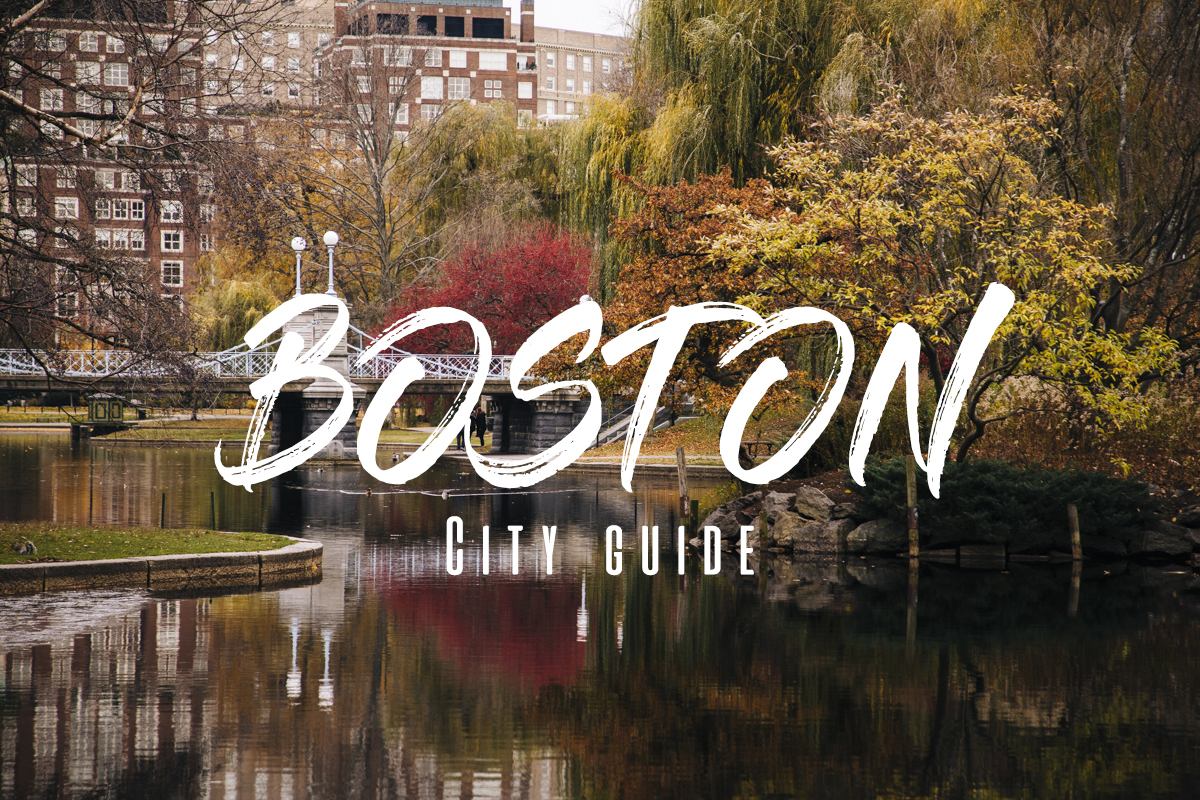 For my second trip to the old continent, I was able to visit two cities close to my heart: Boston and Montreal. One is known for its Universities and the other for its proximity to nature.

My flight from Lyon to Boston with Air Canada

Thanks to this trip, I was able to test the Lyon-Montreal line, which has been open since 2017 by Air Canada and who makes up to 5 connections per week. This direct connection with Canada allows quick access to major Canadian and American cities, because from Montreal, you can take a connection to Boston or Ottawa. And for those who live in the southwest, I announce to you in preview that a direct line from Bordeaux will open soon.

After 7 hours of flight we arrived in Montreal where we took our correspondence for Boston. The flight between these two big cities was very fast, about 1h30, I didn’t see the time pass. Air Canada offers three classes: business, privilege economy and economy. We were able to test the last two. The privilege economy allows you to check in quickly and have your luggage delivered to your destination by express, which can be reassuring for people who are a little stressed on the plane. As for economy class, the legroom is quite respectable for a long-haul flight, and the service on board is efficient. 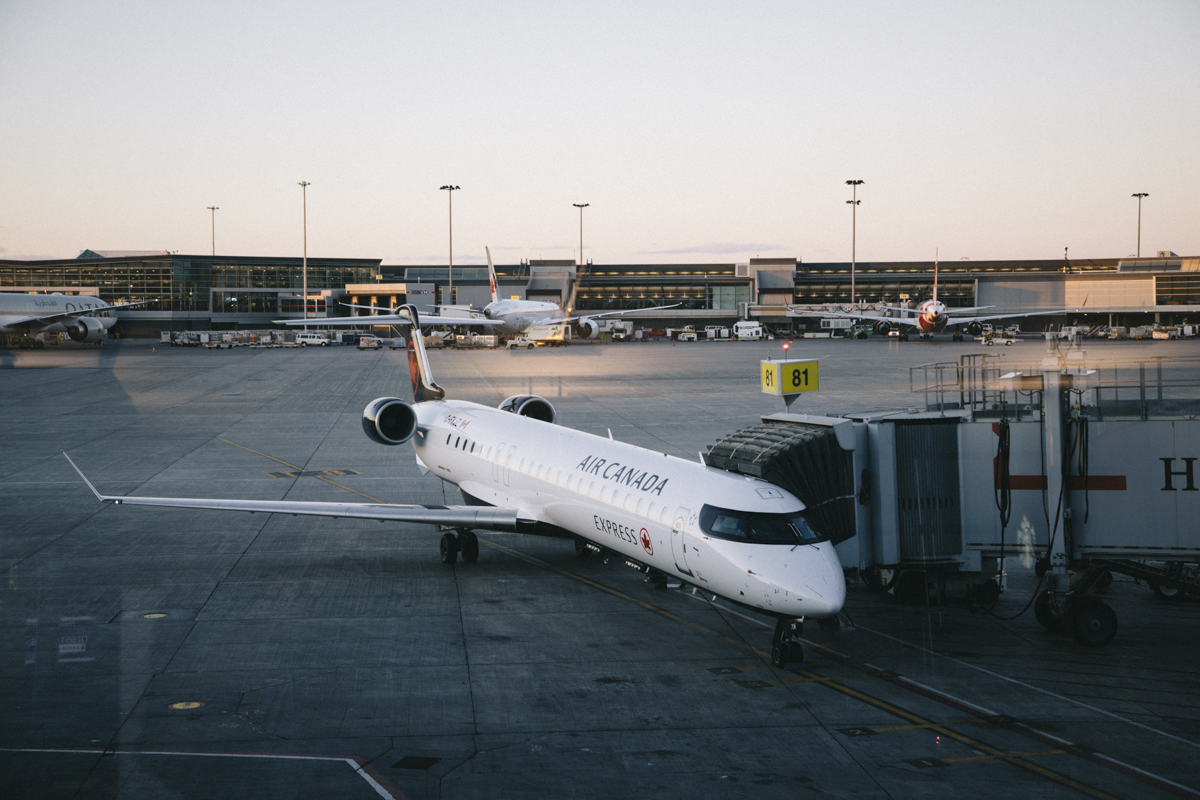 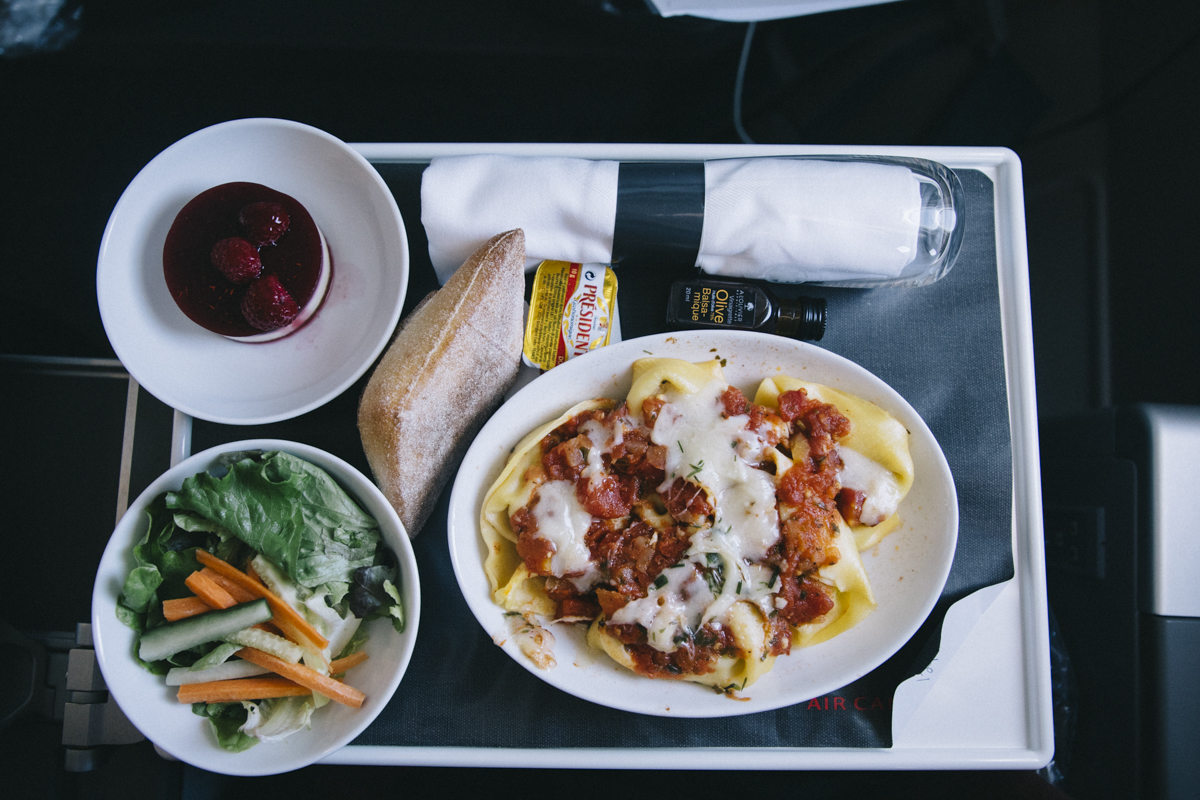 Where to sleep while visiting Boston?

The Freepoint Hotel in Cambridge

For the first night we stopped at Free Point Hotel, its decoration makes me think of these trendy places that we find at the moment in Paris where each room has a warm element. In the room that serves for breakfast and for dinner, there is also a bar where you can enjoy a wonderful cocktail prepared by the bartender. The space is open and shared between a large sofa and mismatched tables. For early risers, there is a Starbucks adjacent to the hotel to grab a coffee before starting the tour of Boston. The hotel also offers shuttles to reach Harvard Square (which is 20 minutes away) with a departure and return every 30 minutes. 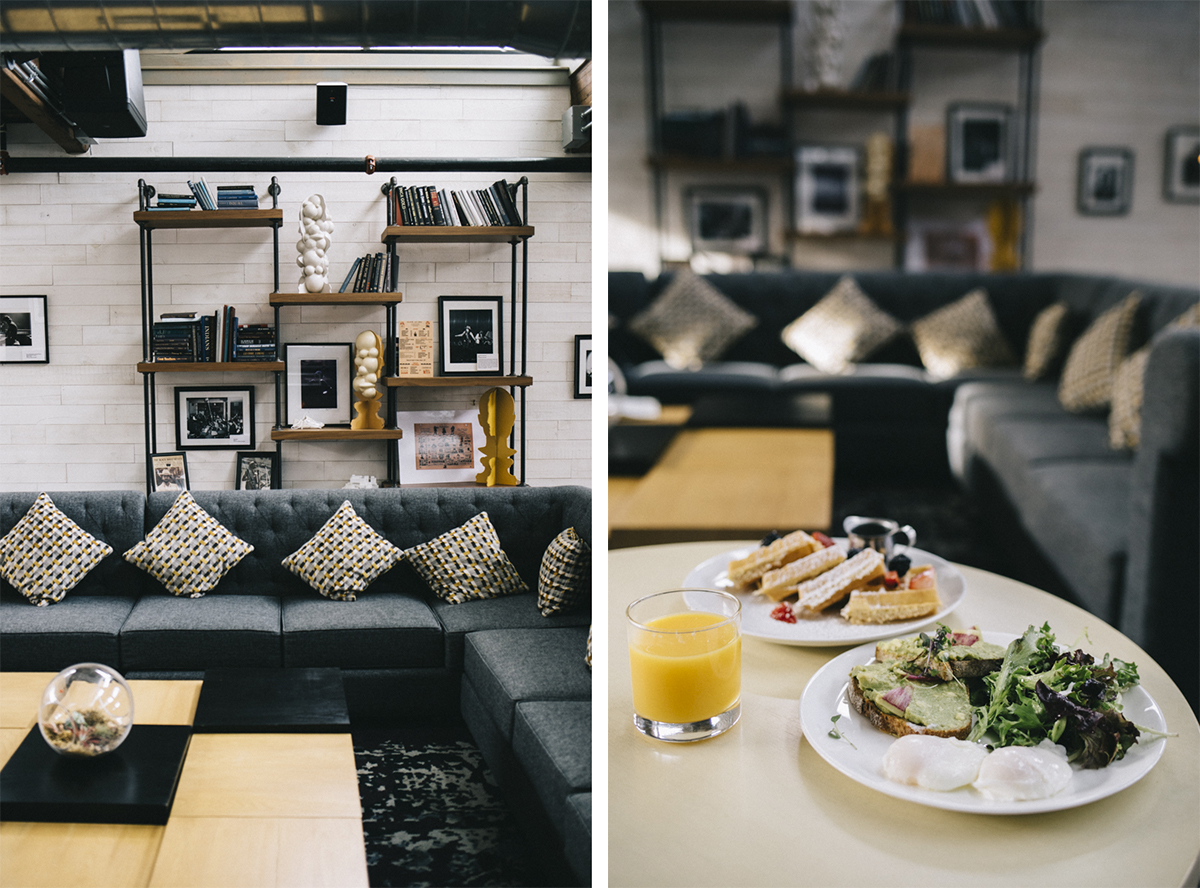 Boston Harbor Hotel, a 5 star for an unforgettable experience

Arguably Boston’s most iconic hotel, the Harbor Hotel is located on the port of the city. Its building is recognizable from afar. The 20 floors give access to a terrace which allows you to admire new neighborhoods and each room has a spectacular view. Within the hotel, the Meritage restaurant offers gourmet menus that we had the opportunity to discover. On the walls hang old navigation maps and maritime paintings. 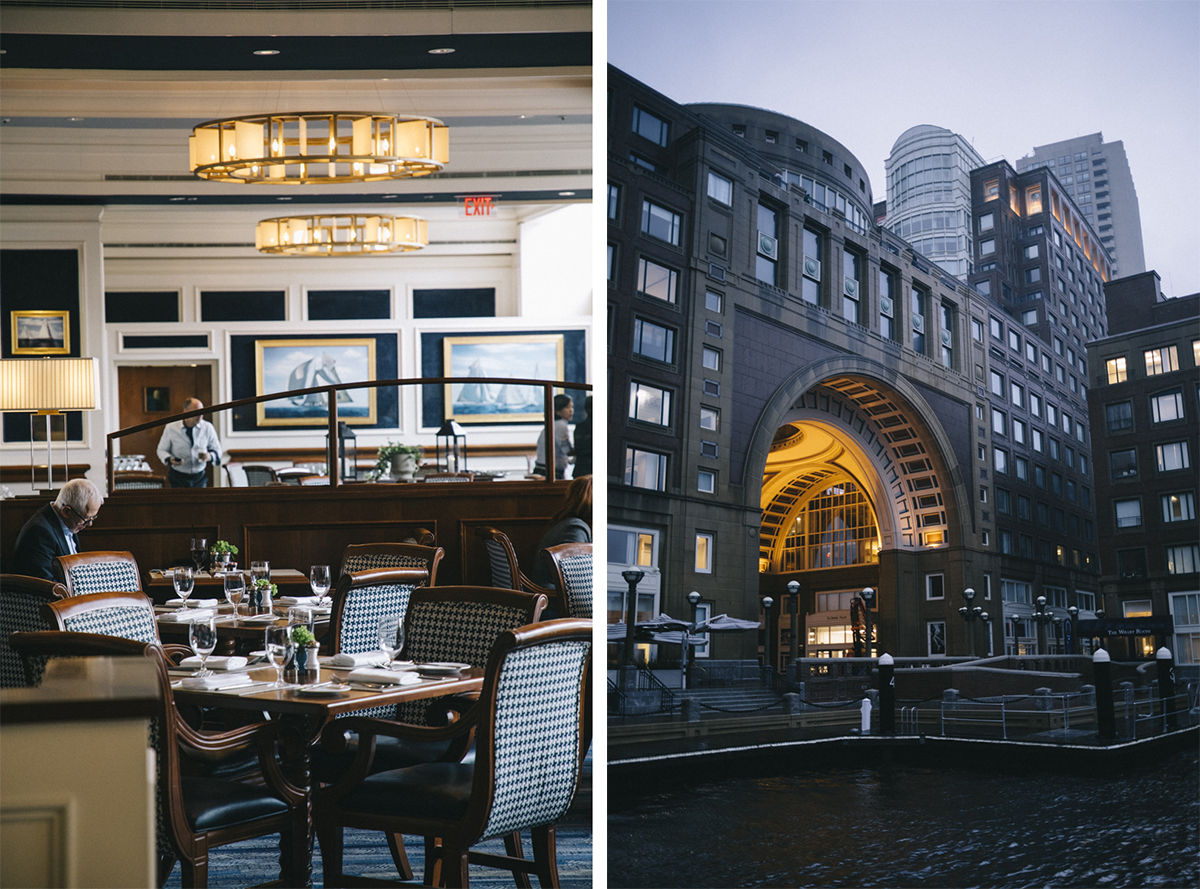 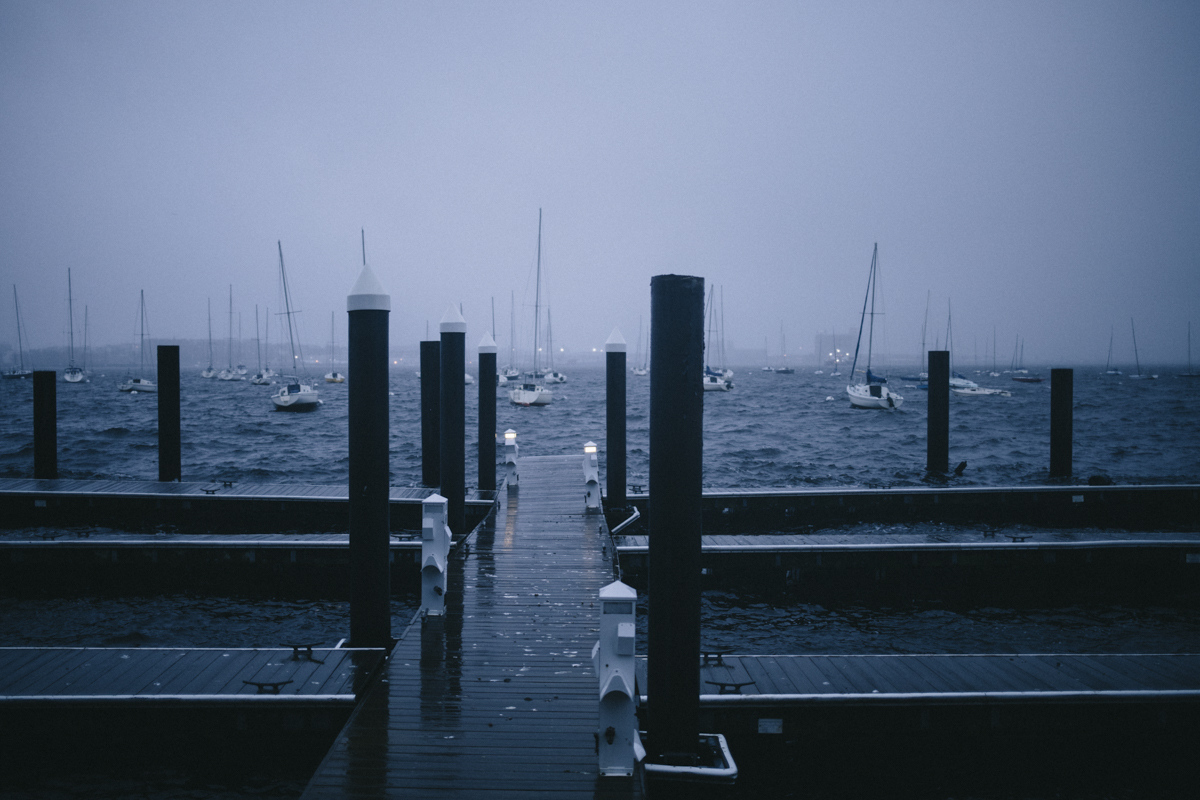 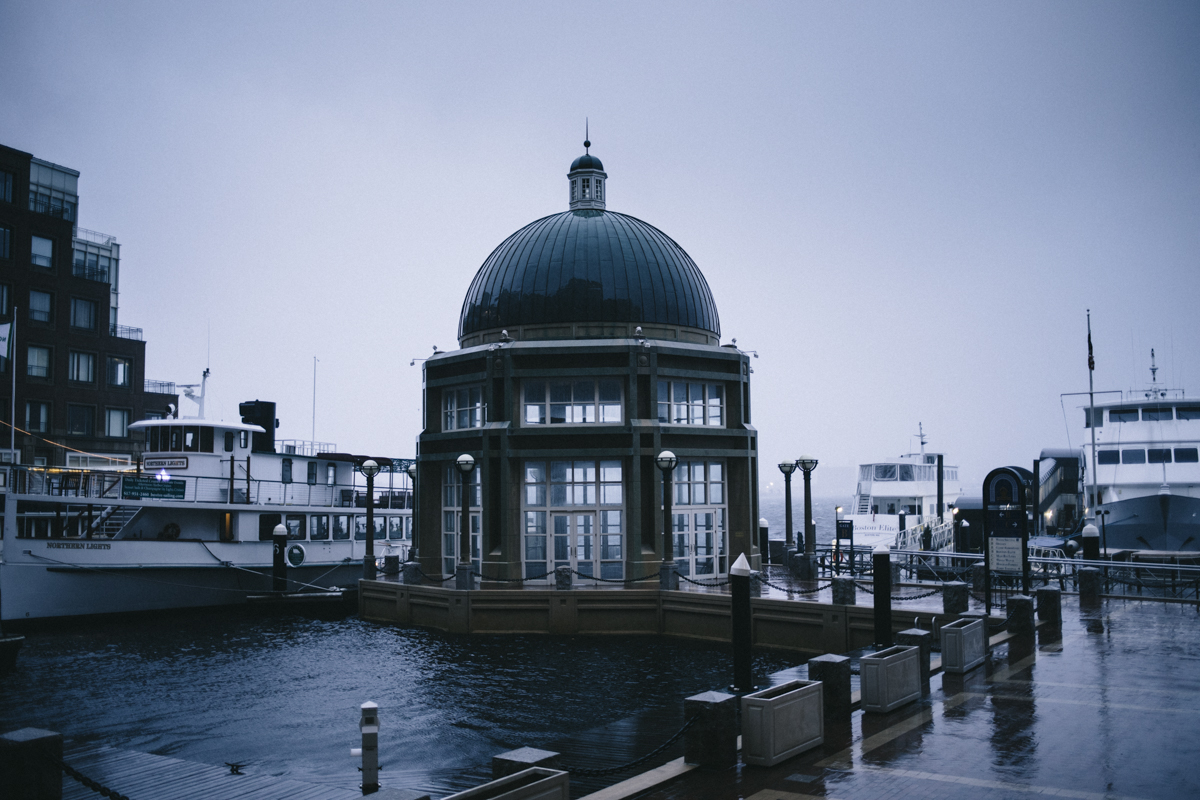 The city of Boston is traversed by a 4 km red brick road called the freedom-trail. This takes us through places that have marked the history of the city. It is possible to follow the path by yourself or to attend a guided tour, where a resident of the city dresses up in 19th century clothes to tell us the history of the place.

Practical information for taking the guided tour of the Freedom Trail 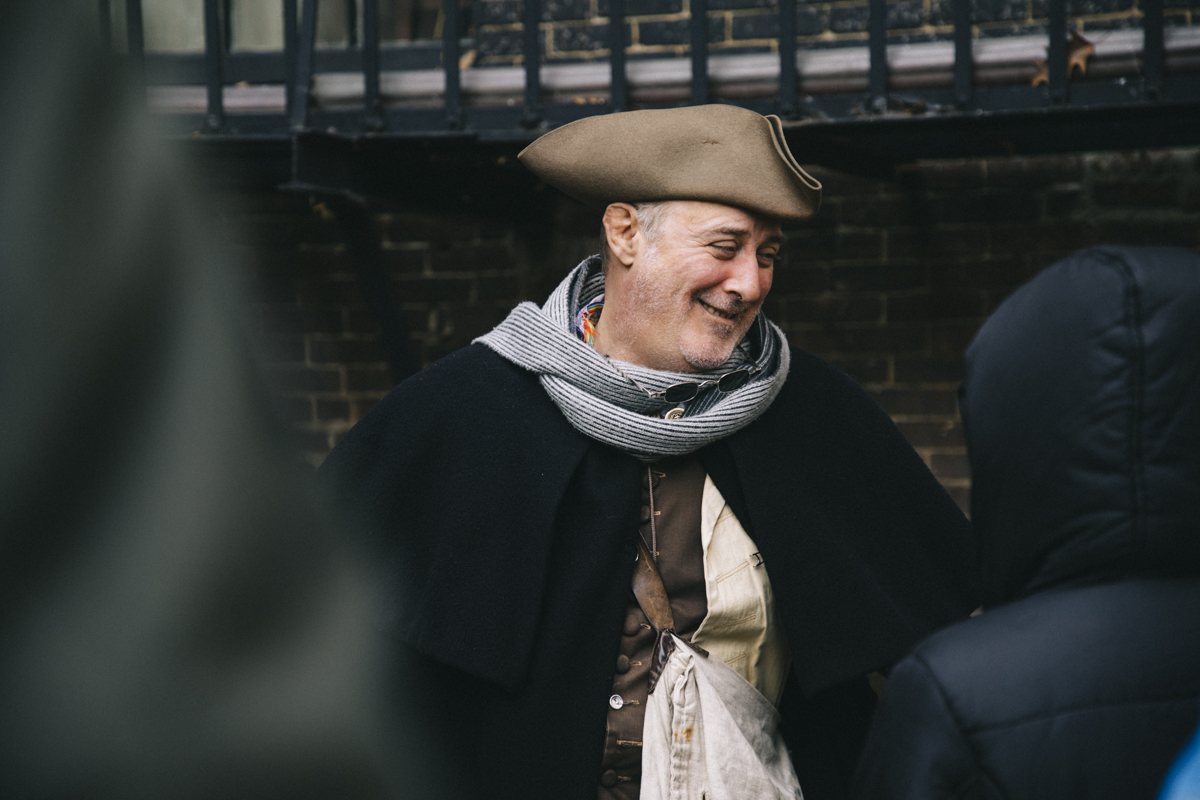 The meeting is given right next to Faneuil Hall, a place where political debates on slavery and women’s rights took place a few decades ago. On the other side is Quincy Market where you can eat a good meal at lunchtime. 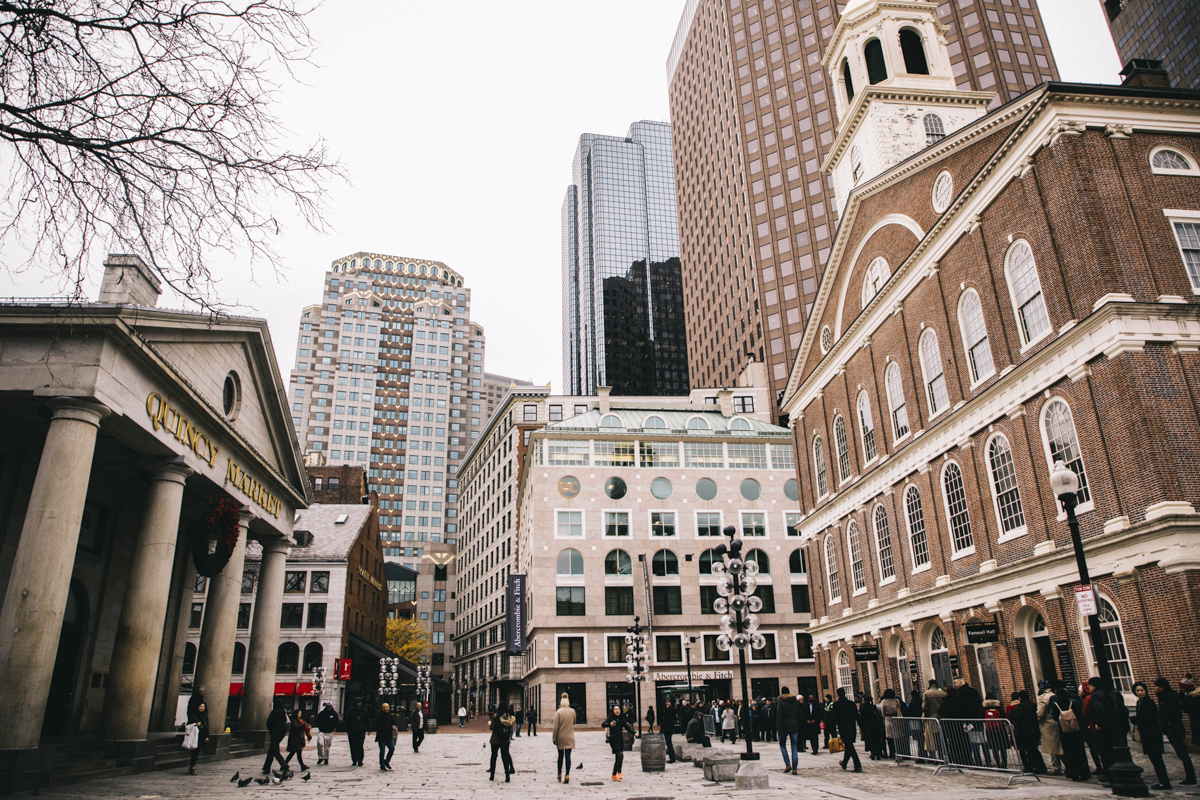 After the introduction of the Freedom trail and Faneuil Hall, we begin to follow this strip of red bricks on the ground to arrive at our second point of interest: Old State House Museum, which is none other than the oldest public building in Boston. This magnificent red brick building was the center of the stock exchange and the place where the assembly of Massachusetts met. Today Old State House Museum has become Boston’s icon, as it is surrounded by tall buildings, which reflects the mix of old and contemporary buildings that can be seen everywhere in this city. 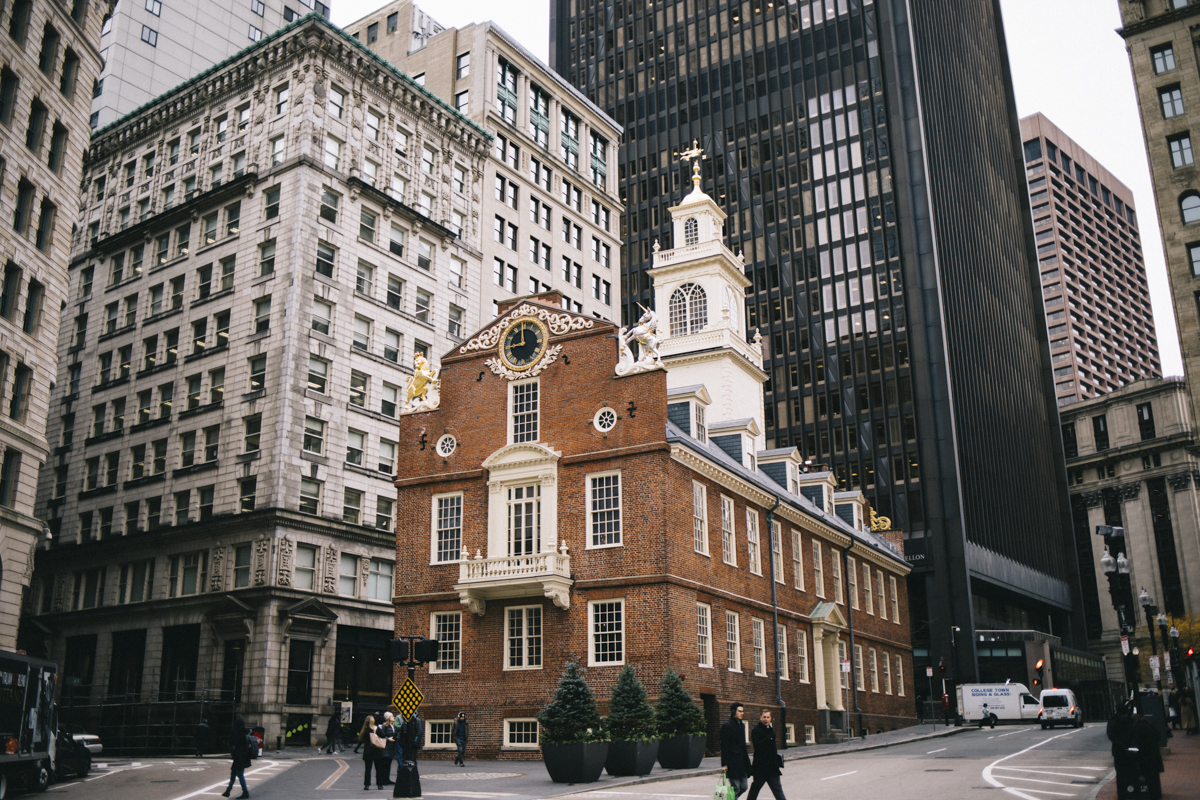 We walk a few minutes to arrive on School Street, this is where the first public school was born. The Boston Latin School was founded in 1645, it offered education to the boy whether they were rich or poor. It was only in 1972 that this school began to welcome girls on its benches. At this stop, you can also admire a statue of Benjamin Franklin. 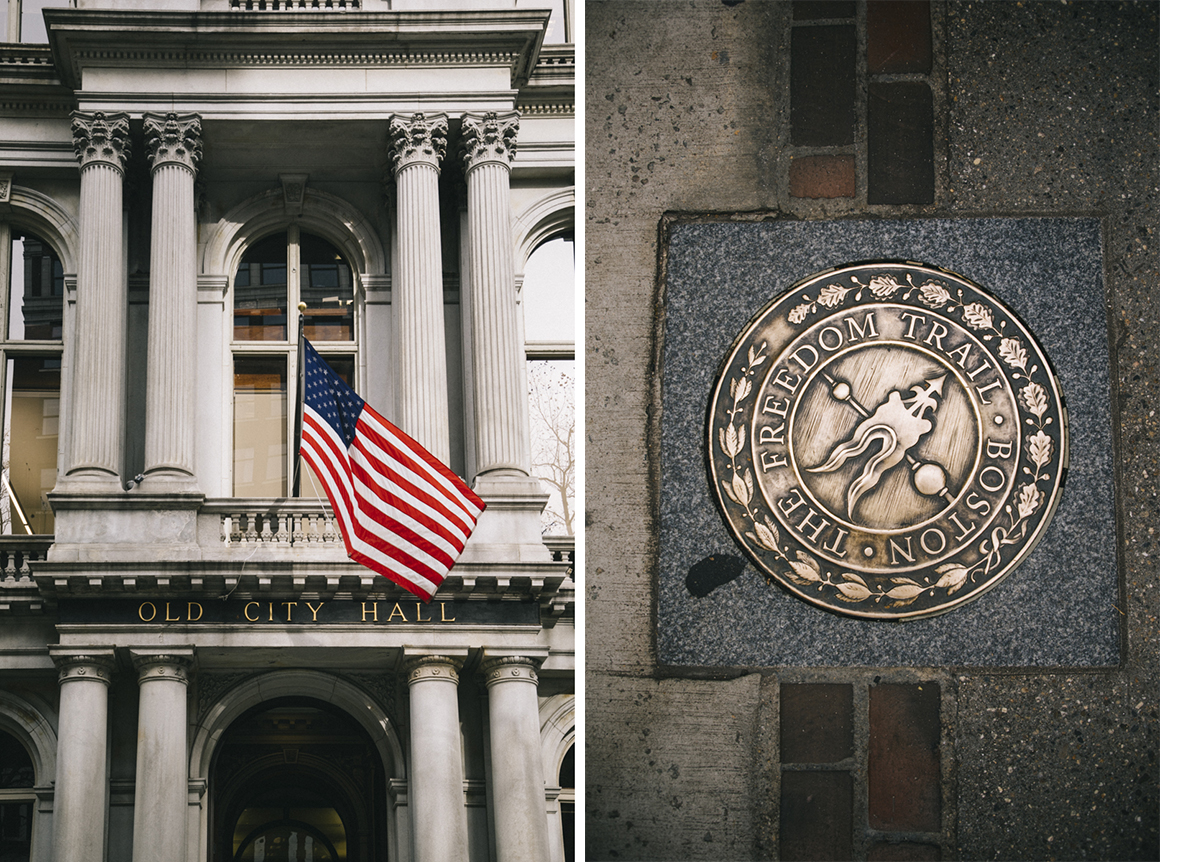 Then, we take the Freedom trail towards Granary Burying Ground. This cemetery is very well known, because it is here that a large number of people known to the american revolution. John Hancock was the first to sign the Declaration of Independence in 1776. Samuel Adams was one of the leaders of the revolution that saw the Declaration of Independence born. Paul Revers, whose guide spoke to us at length and whose house it is possible to visit, is known to have traveled at night to warn the rebel troops of the advance of the English. In this cemetery, there is also a monument erected in memory of Benjamin Franklin, but contrary to what she makes believe, he is not buried in this cemetery, only his parents are. 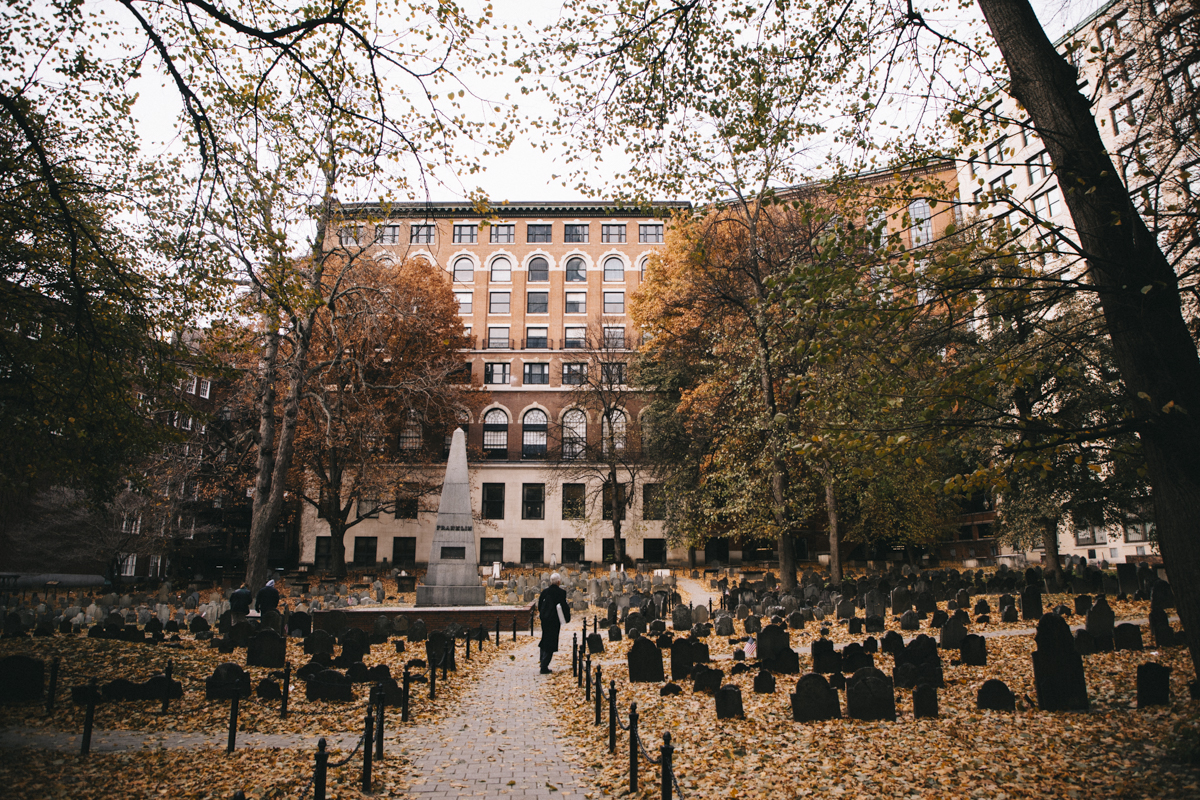 After this stop, which highlights several important figures of the revolution, we went to the oldest park in the United States: Boston Common. What I liked the most about this park were the very docile squirrels that come running up to you if you call them. While Central Park (in New York) opened in 1857, Boston Common was inaugurated in 1634. In autumn, the trees are adorned with magnificent colors ranging from yellow to red. 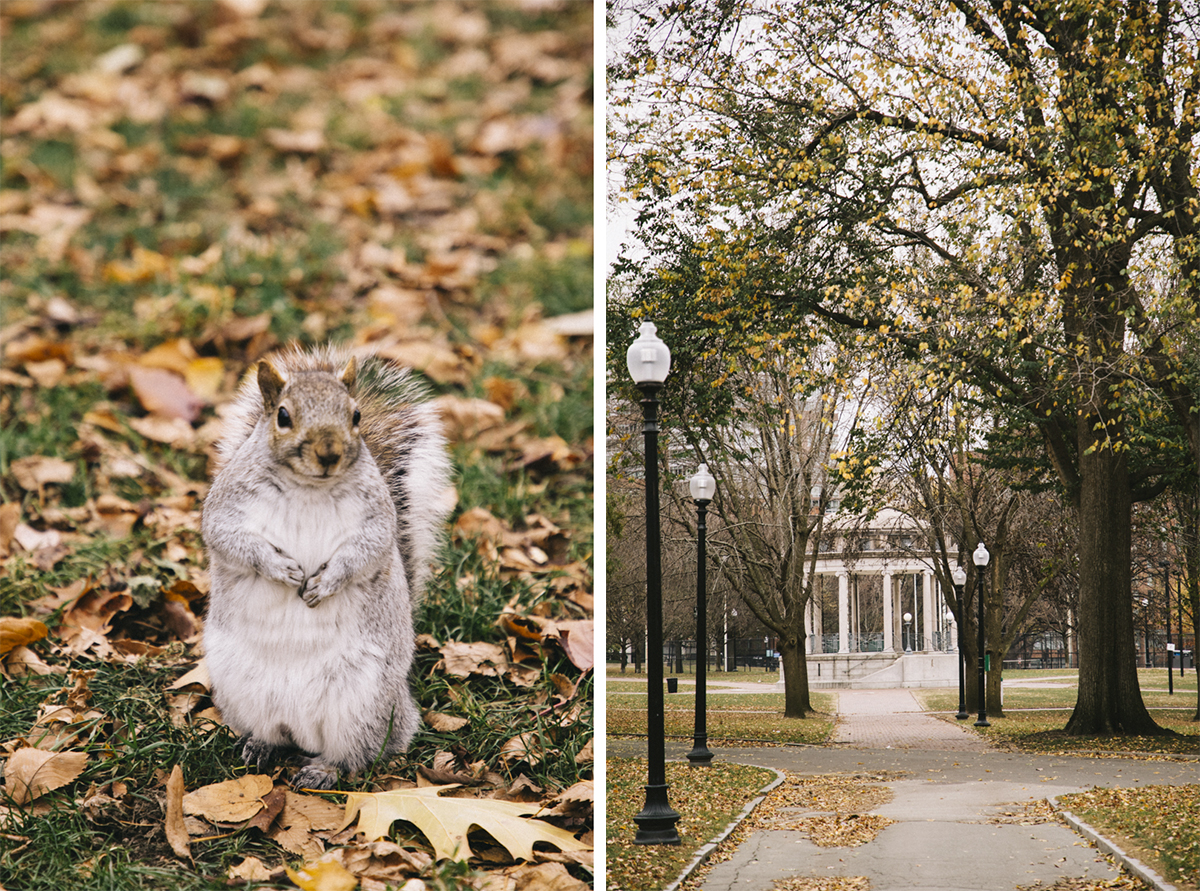 Even before being in Boston, I had heard of Beacon Hill which several people had recommended to me. At the end of the Freedom trail, we realized that we were not far from it. Indeed Beacon Hill, the district all in red brick, is located just behind Boston Common, the park with the squirrels. Fall is surely the best season to visit this very chic area of ​​Boston, because every staircase that leads to a front door is decorated with pumpkins. At the gates were able to see magnificent decorative wreaths and the trees that line the streets are flamboyant. Beacon Hill is located on a hill so a few streets are uphill, but it gives a nice perspective for photos, especially in Acorn Street, the famous street with the American flag. The area also has many private gardens and courtyards that can be visited once a year (https://www.beaconhillgardenclub.org/tour). Allow about an hour to properly circumnavigate Beacon Hill and snap all the photos you want. 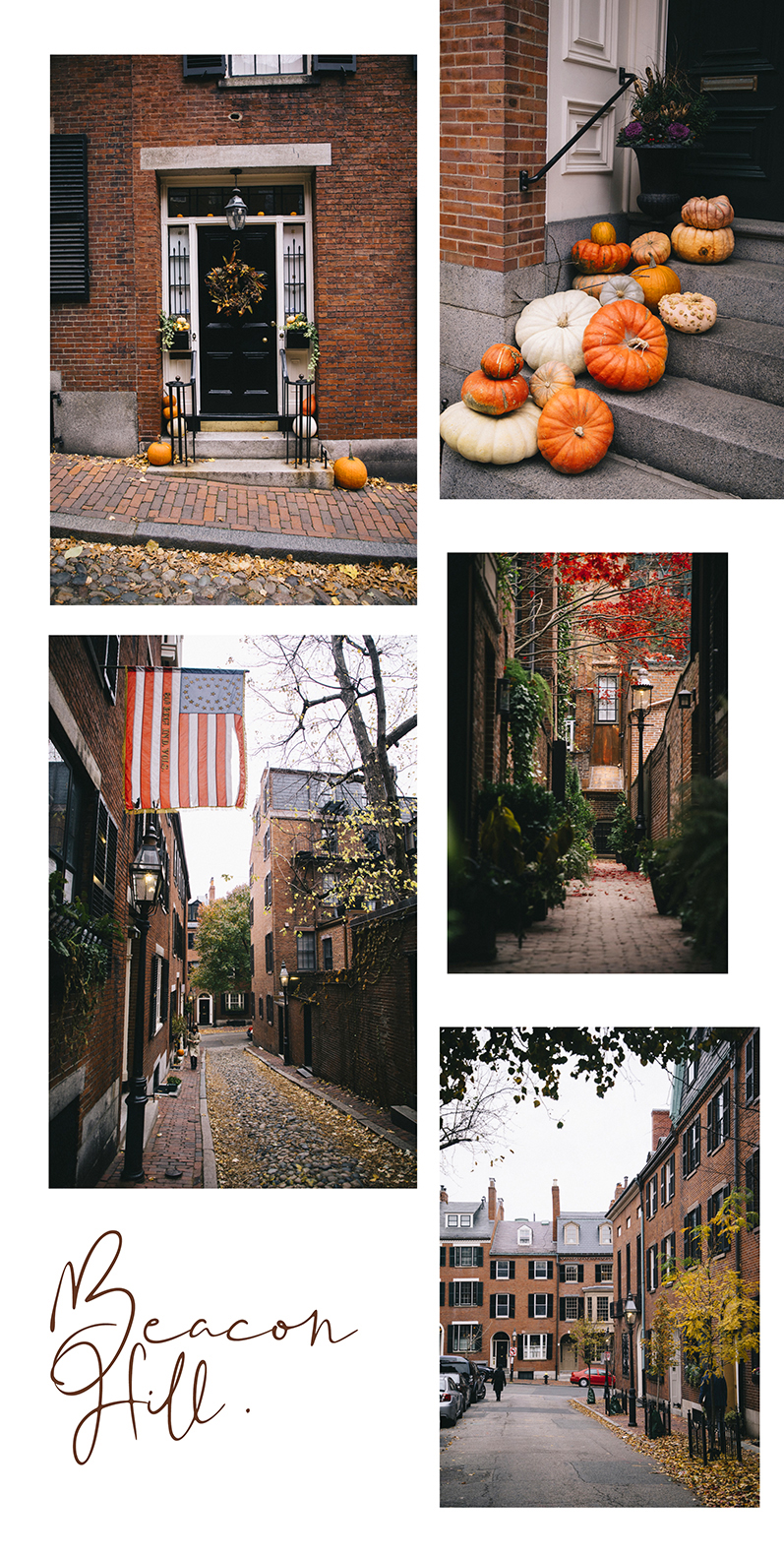 The Paramount, an address to eat in Beacon Hill:

Located on Charles Street the restaurant The Paramount is an improved fast food restaurant, for those who like to eat good food while being served quickly. I recommend their special burger with sweet potato fries for $15. It is open daily from 8 a.m. to 10 p.m. 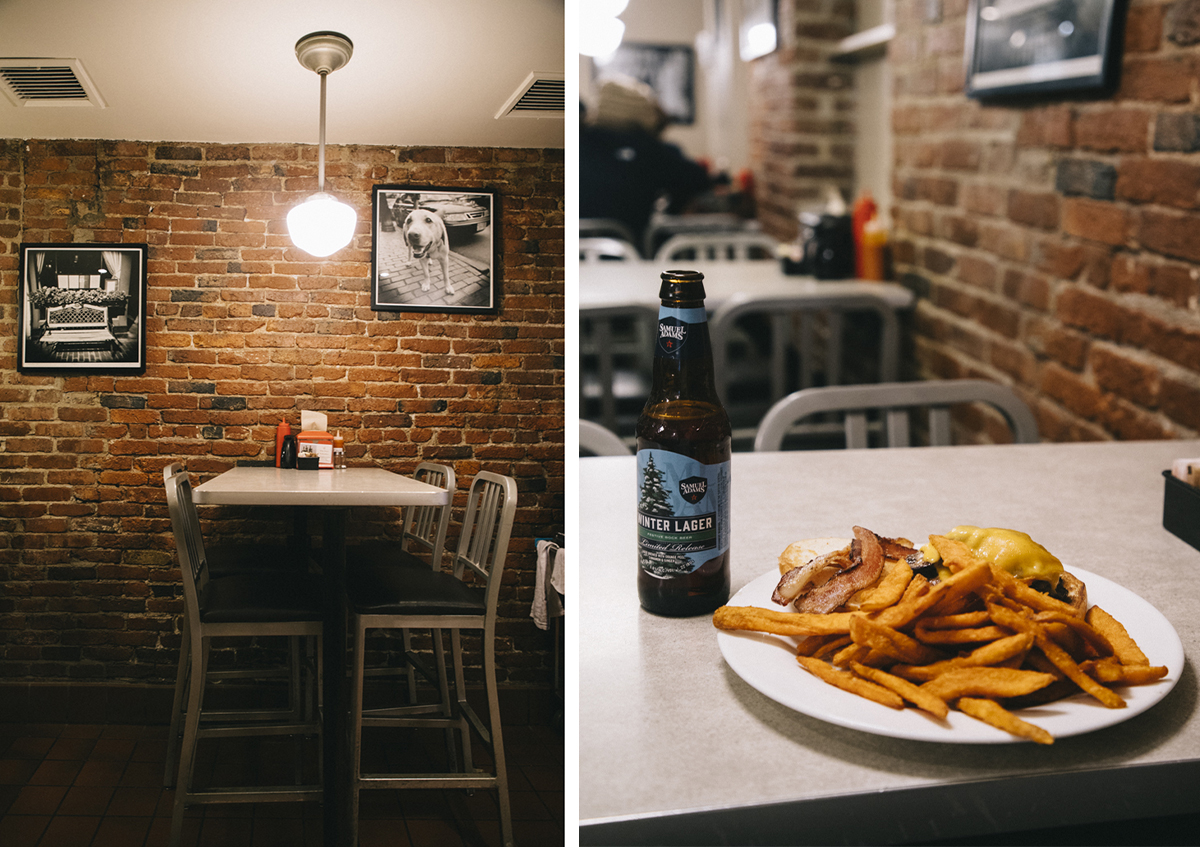 Skywalk Observatory, an attraction included in the Boston City Pass

During this short day in Boston, we only had time to do one of the attractions included in the Boston City Pass. Like many other American cities, Boston offers a City pass for $59 ($47 child) which will give you access to the following sites:

In the short time we had to visit Boston, we only managed to climb to the top of the Prudential Tower to admire the panoramic view of the city from Skywalk Observatory. It’s always impressive to see houses and buildings side by side. This allows you to better understand the architecture of the city and to situate yourself inside. I leave you with the photos of Boston. 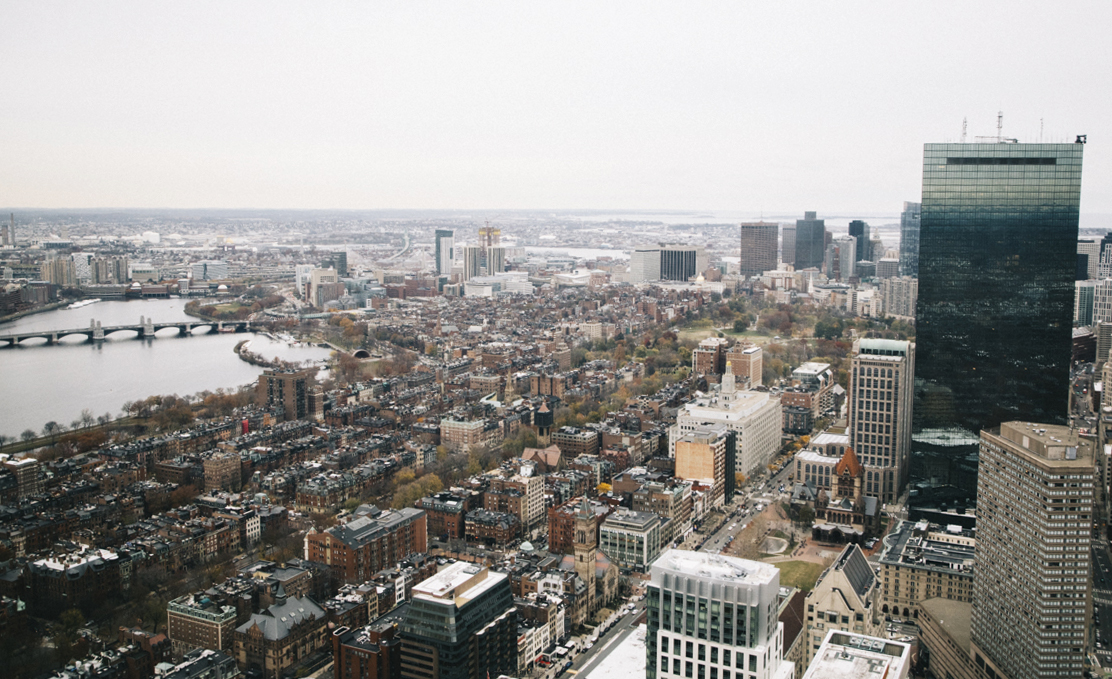 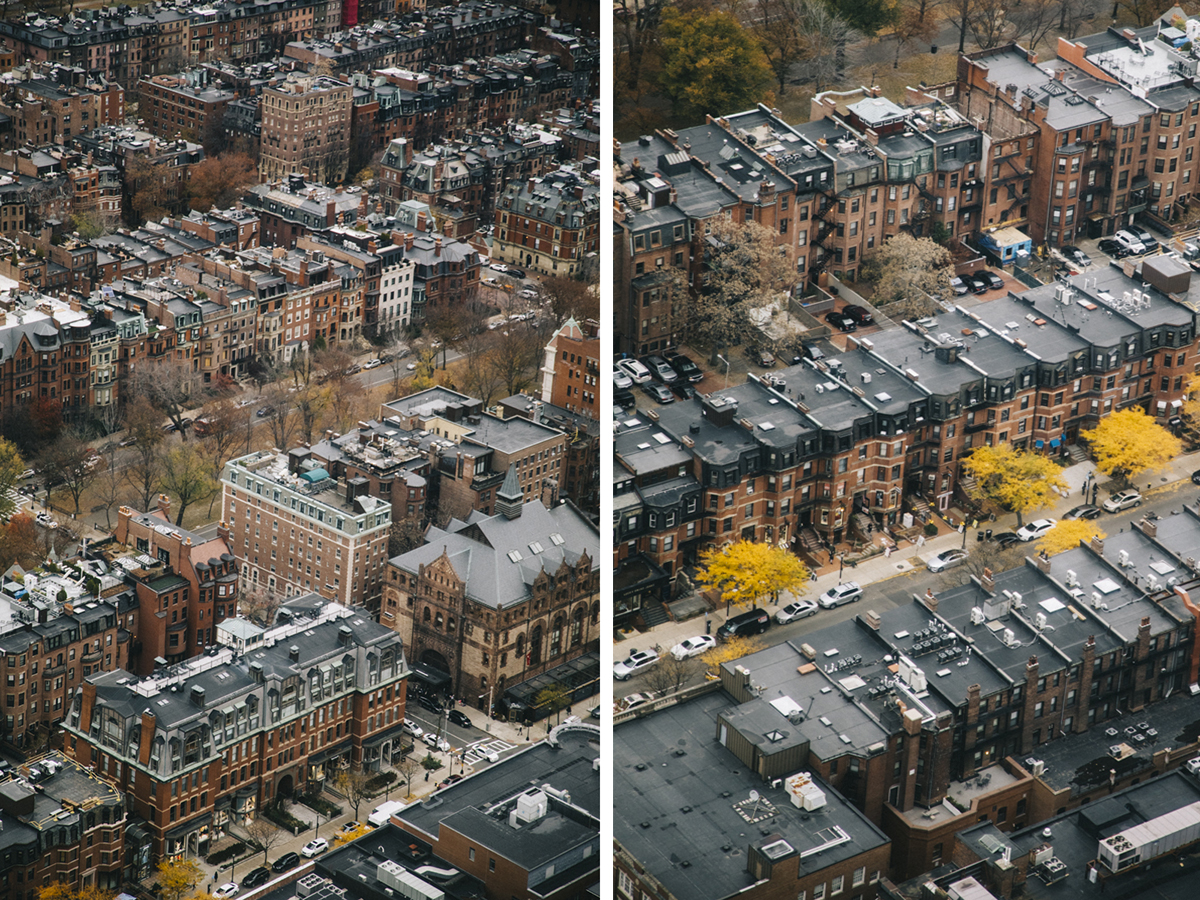 Play the students of Harvard, the most famous University

Passing through Boston we could not fail to visit the most famous University in the world: Harvard. If you have some time to spend in Cambridge, you can also go to MIT, another well-known university specializing in new technologies. At this time of year the campus was relatively quiet. Moreover, night fell very early. We only walked around the outside of Harvard passing through the main buildings of the University. We like to imagine that great men and women have been there. During my visit, I stopped in front of Widener Library which was donated by the mother of Harry Widener, a former Harvard student who loved to read but lost his life in the Titanic drama. These large stone columns reinforce the respect that one can have in this place. Once the tour of the campus is over, a visit to the souvenir shop is a must. The smaller one, which is just opposite, is run by university students, but it offers fewer choices than at The Coop, where you can find all the colors of sweatshirts you want. 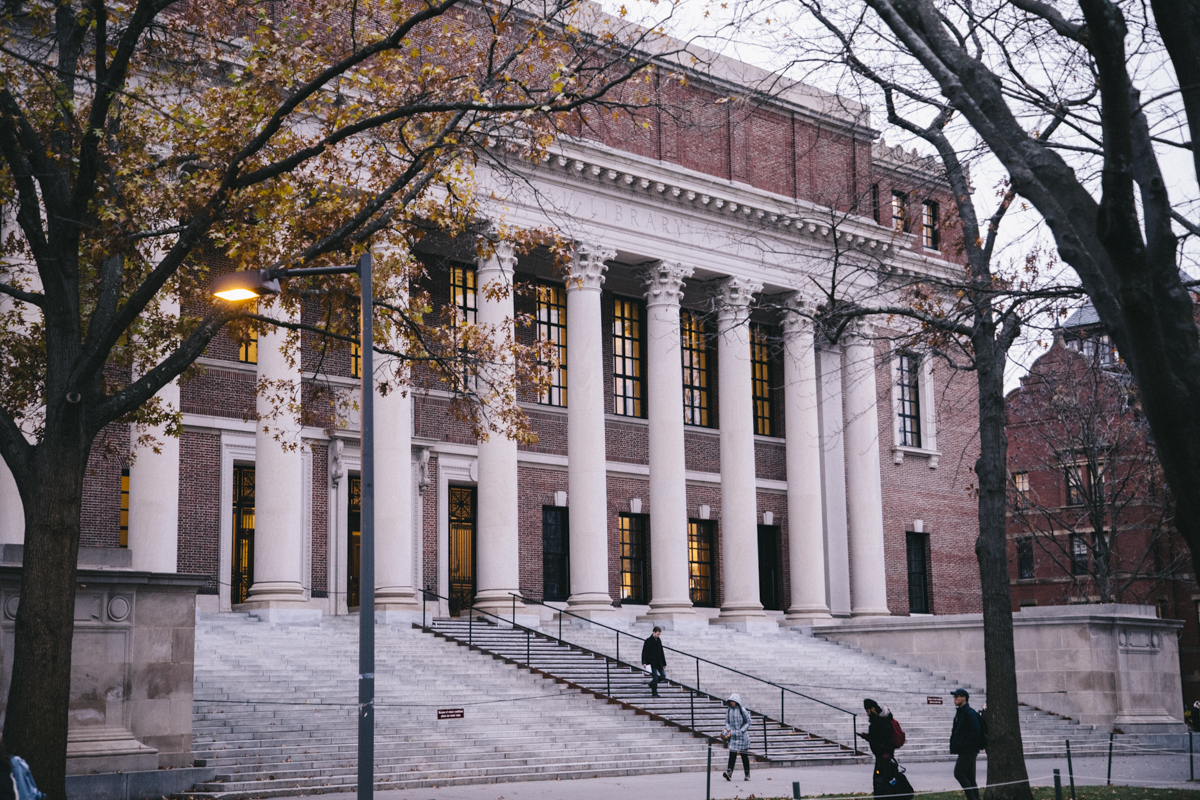 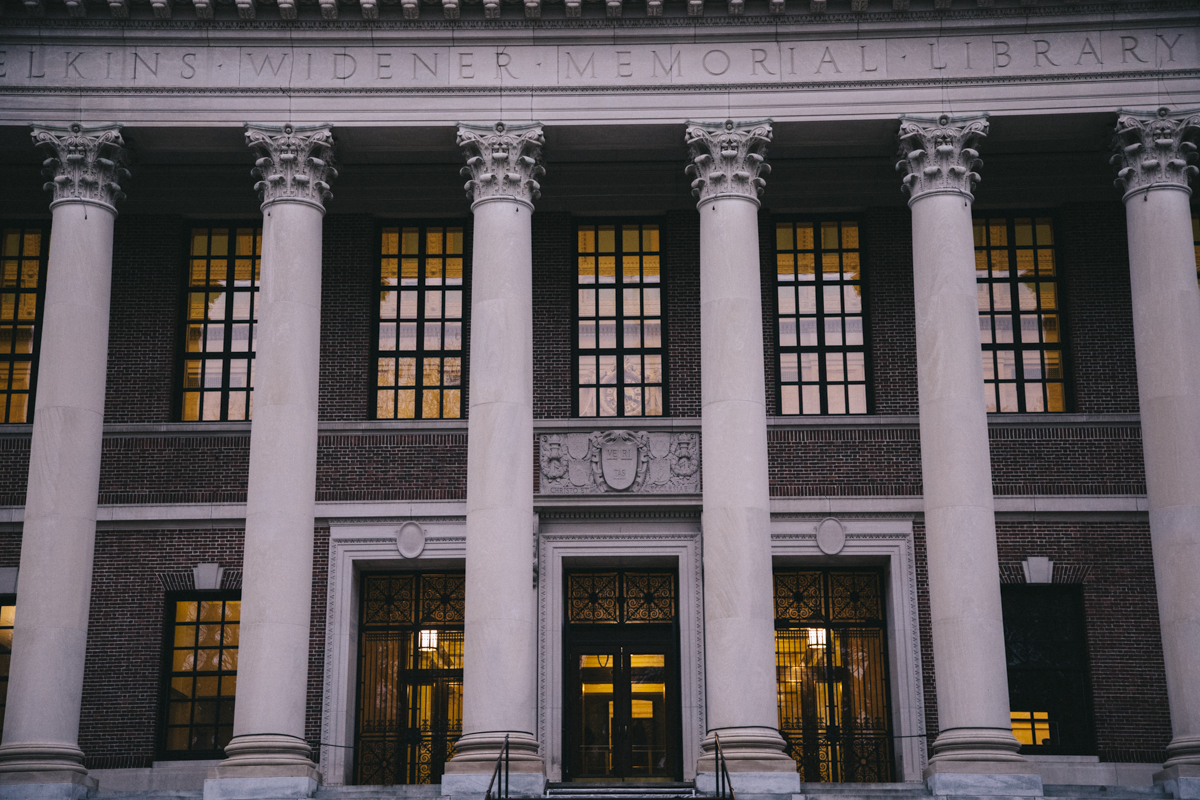 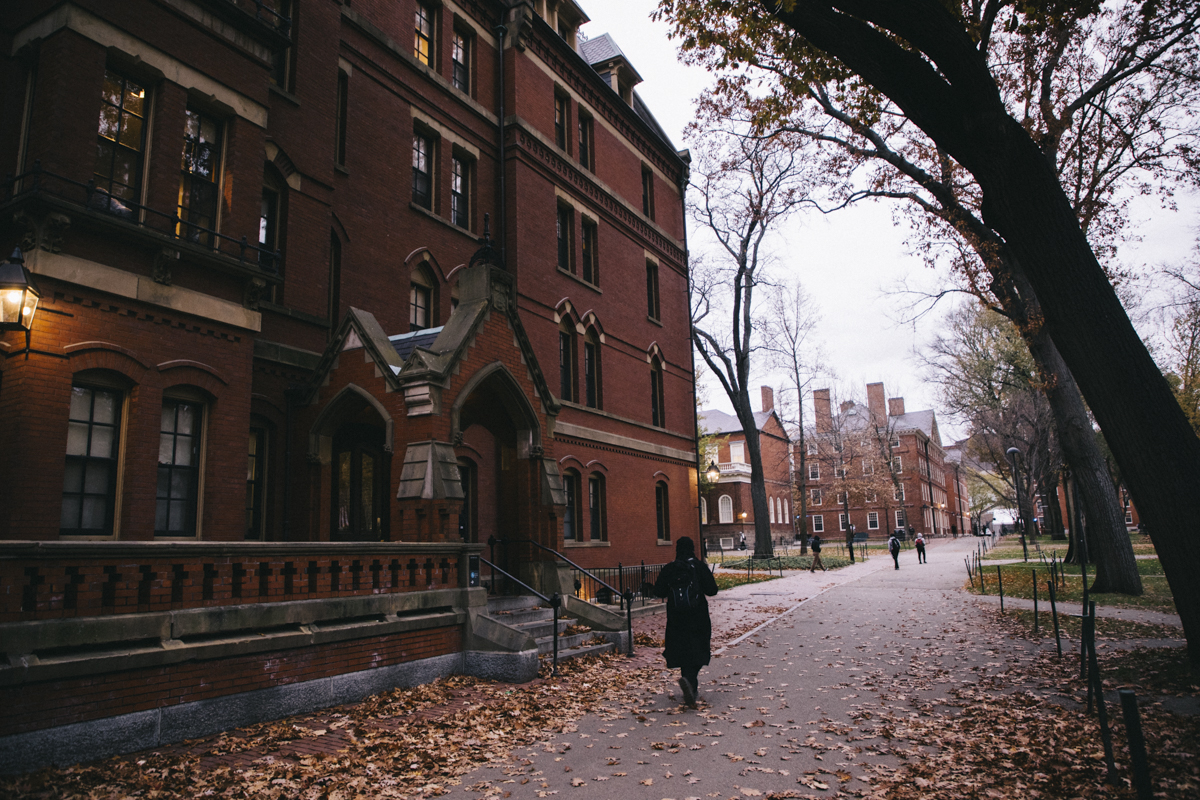 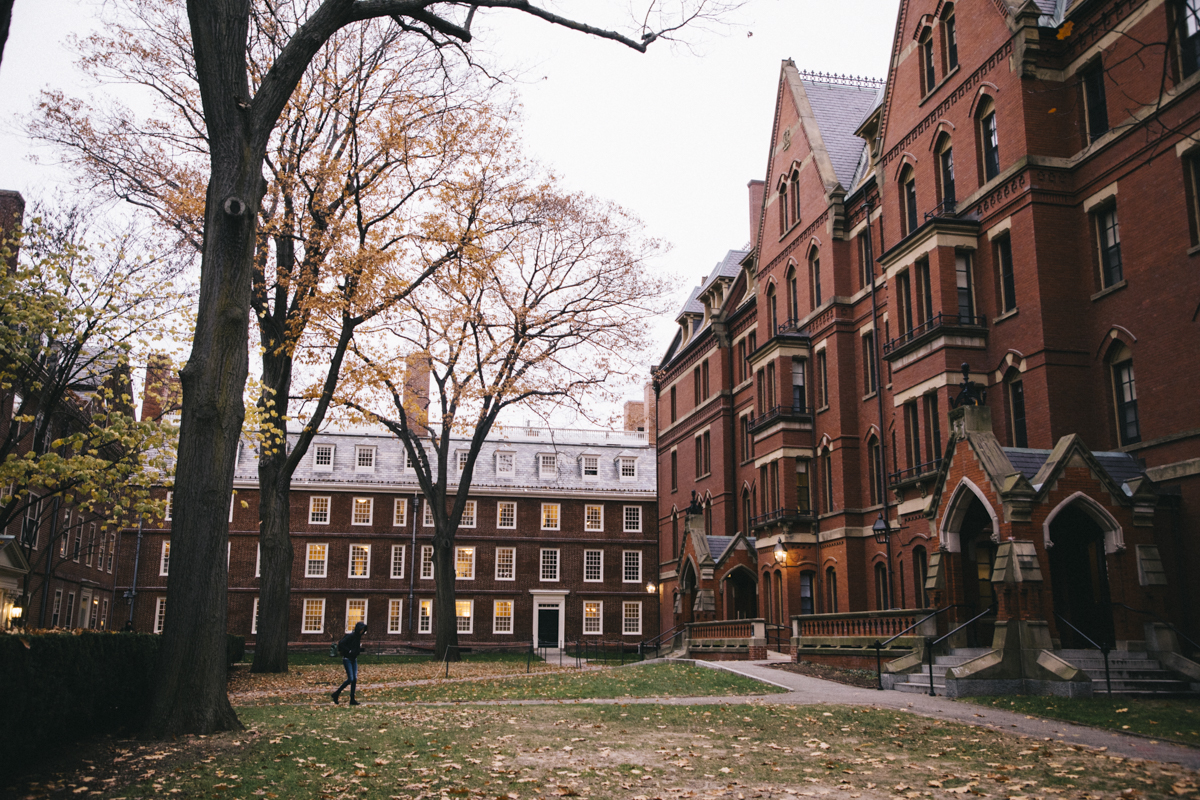 I hope this article has made you want to visit Boston and discover the charms of this American city through which many famous people have passed. To plan your visit to Boston, do not hesitate to call the‘Massachusetts Tourist Board who accompanied me on this trip. I also thank Air Canada (which you can contact at 33 (0) 825 880 881) which allowed me to discover Montreal during the same stay, on which I will publish an article very soon. 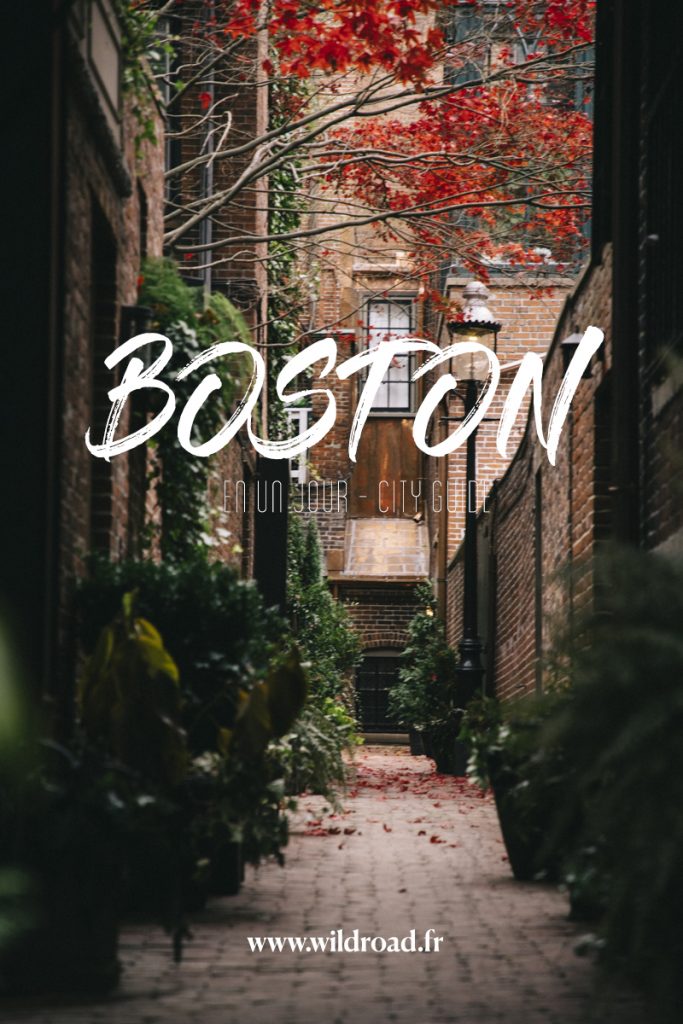 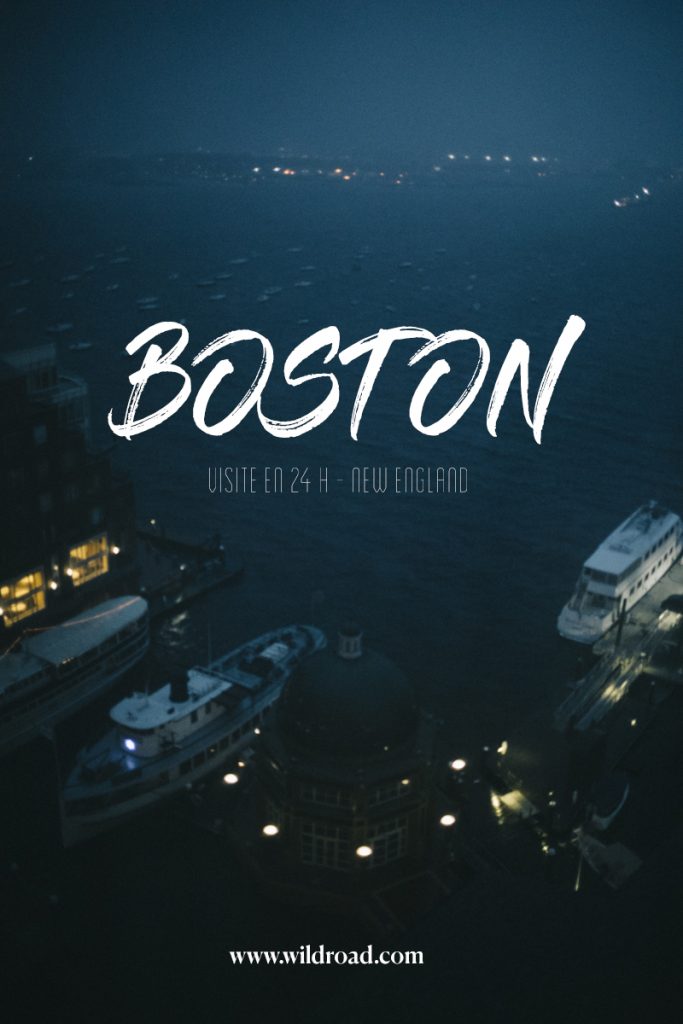