From the white-marble bridge I stand on, a canal stretches away from the Venetian lagoon. Colonnaded palazzi line one side, opposite wonky buildings in shades of vanilla, peach or beetroot. A church looms overhead, its belltower recurring in the placid green water. It’s an exotic, enchanting scene. But this is not Venice.

It is, instead, Chioggia, at the far south of the Venetian lagoon. Look closely and despite its “piccola Venezia” nickname, you’ll actually see many differences. Chioggia is also formed from islands, but is much smaller, with just three canals.

It’s thought to be older than Venice, but there are far fewer tourists and almost no selfie sticks. The air is saltier. You might see a car. Fishing boats have the monopoly, with gondolas entirely absent. And whereas Venetian waiters tend to have word-perfect English, few here — including in my favourite, Pizzeria Vigo, where a decent margherita costs just €6.50 (£5.50) — speak more than a smattering of “English”.

Another distinction is that you can cycle in Chioggia — which is why I’m here. The tourist board has put together five routes for cycliststaking in lesser-visited spots around the lagoon from scented pine woods to ancient fishing villages such as Caorle. 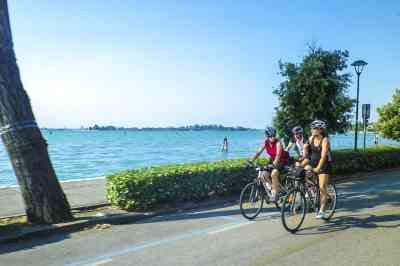 The support for bicycle travel here connects to continuing efforts to ease Venice’s overtourism. When pre-pandemic annual visitor numbers soared to 30 million, the city responded by banning cruise ships from central canals; a trial beginning next month will require day-trippers to book ahead and pay up to €10 to enter, while visitor caps are also being mooted. One way to help ease La Serenissima’s burden is to travel further around the lagoon, beyond its headline act.

Staying in Chioggia puts three of the cycling itineraries in easy reach. It helps that my base, the longstanding and luxurious Hotel Grande Italia, rents out comfortable, single-speed bikes and is positioned exactly 10m from Chioggia’s vaporetto dock on Piazzetta Vigo. (This location also ensures terrific lagoon views from its neat, neoclassical rooms.) Line 11 duly chugs me and my ride one island north to wisp-thin Pellestrina, southwest of the Lido, for an initial outing. 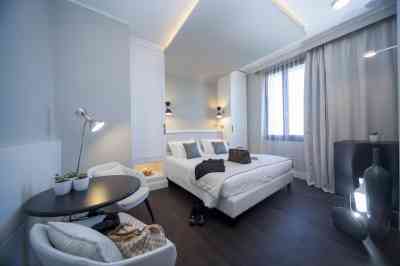 A room at the Hotel Grande Italia

Though rarely more than 300m wide, Pellestrina is seven miles long and completely flat, making for an easy up-and-down pedal. A main road hugs its eastern flank (there’s a car every three minutes), bordering a driftwood-strewn sandy beach and the Adriatic Sea. More interesting and sedate is the westerly lagoon side, which I follow via a combination of lanes and esplanades. In the hamlet of San Pietro in Volta, more pretty pastel-shade buildings fringe the glinting water.

Pellestrina is mostly quite plebeian: shipyards, empty arable lots and vegetable fields outnumber vivid houses and some handsome churches. Yet there’s a joy in meandering through its four sleepy settlements, or watching islanders set the world to rights over espressos. 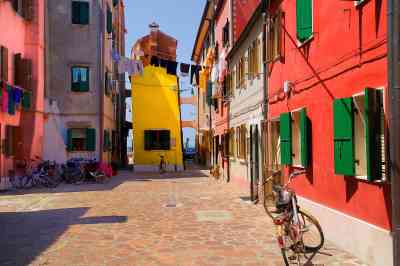 I pause for an alfresco octopus salad and beer at Al Gatto Rosso, just a thin pontoon between me and the water, before proceeding in wobblier fashion along the curving stone sea wall to Ca’Roman, a small nature reserve at Pellestrina’s southern end. Wandering along its empty forest paths, I encounter more abandoned Nazi bunkers than fellow walkers.

The itinerary also suggests riding up the Lido island, further north, but since I’m only an out-of-shape, occasional cyclist I decide against that. Instead, with bum pained and energy drained, I leave the bike at the hotel and make the 90-minute journey to Venice on foot — via bus, ferry and vaporetti towards Venice’s spiers and silvery domes. I roam Venice’s quieter corners: the student-trawled periphery of stately Salute, grittier Castello’s striking squares and glorified, wide towpaths in Cannaregio’s northern reaches. The Rialto Bridge exerts an irresistible pull, offering undeniably idyllic views, but how horribly, overwhelmingly busy it feels to me after Chioggia and Pellestrina. Dozens of tourists elbow, inch or nudge their way into photo spots with no regard for personal space.

The Lido is quieter, perhaps because today’s clouds have undermined its star attraction: a long, lovely sandy Adriatic beach with hundreds of huts. There’s no one in the leafy Jewish cemetery either, where orange and palm trees shade tombs. Once more, a dreamy peace reigns, interrupted only by snorts of distant Vespas or shrill birdsong.

The reliable 11 bus then speeds me south to where I might have cycled, past the grand Hotel Excelsior‘s red-brick fantasia, past stilted houses and an outdoor sculpture museum.

Posterior pains eased, I get back in the saddle a day later and follow a circular version of the tourist board’s Chioggia cycling route, which soon deserts the lagoon altogether by heading further south. It takes me to the neighbouring, newer town of Sottomarina, which has a six-mile sandy shore famed for its iodine-rich air, beneficial to ailing lungs. I could have pedaled along the pier-like sea wall, but instead I continue through plain suburbs. The sea wall at Sottomarina

Just before I cross the Brenta River, something surprising appears. Can it be? Surely not. But there’s no doubt: it’s a hill. Admittedly only a slight, brief incline, but nevertheless the first ascent I’ve had to tackle all trip. Luckily, this being Italy, there’s also a bar so I do the sensible thing and have an espresso first.

Post-Brenta, a slumberous lane takes me along the pleasant Canal di Valle before another shadows the wider Adige River. It is delightful: barely a car passes me as I watch jays, then pause to spot radicchio plantations, sugar-cane fields and lonely casoni buildings inland. Farmers once lived in these dinky shelters; now they mostly function as tool sheds.

The languid rural splendor gives way to Isola Verde, a beach village with funkily colored (if ugly) apartment blocks. A few country lanes and one more riverside stretch later, and I’m almost home, the 20-odd miles having proved a breeze. On my left I spot Chioggia’s port. According to recent news reports, millions of euros are being allocated to create a docking point here for surplus Venice cruise ships — surely a threat to Chioggia and its character.

I get a full dose of that charm as I finish my ride on its main street, Corso del Popolo. Thursday is market day, but this Saturday still sees a fair number of stalls selling regional breads or cheeses. Some people are sipping wine outside aperitivo bars, others stroll and gossip, disappearing down narrow side streets. I slowly weave around them before stopping beneath Torre di Sant’Andrea, whose blue clock dates from at least 1386 and might well be the world’s oldest working example. Up by Piazzetta Vigo, opposite that white-marble Ponte di Vigo bridge, mollusc, scallop and sea-snail shells hang on twine outside a souvenir shop; breezes coming off the nearby lagoon make them tinkle like a foreboding Venetian remake of The Wicker Man.

A celebratory last-night dinner is called for. Many of Chioggia’s posher restaurants have Venice-like prices, but the casual Bacareto da Morgan is more reasonable. Sitting canalside, I order cicchetti (Venetian small plates, from €1.20) with a Chioggiotto twist: radicchio meatballs, marinated sardines, three buttery scallops. Around me are families and couples on seemingly successful dates; a fisherman bobs past, shouting fondly to his friend.

Before bed, I loiter on the lagoon edge and gaze north. Venice is out there somewhere, as magnificent and preposterous as ever. Yet I’m perfectly content here, in its almost forgotten predecessor.

Richard Mellor was a guest of the Lidi di Chioggia tourist board, Venice Tourism and Hotel Grande Italia, which has B&B doubles from £103; bike hire from £8.50. Seven nights’ B&B on a self-guided cycling trip from Lake Garda to Venice from £1,645pp, including bike hire (skedaddle.com) 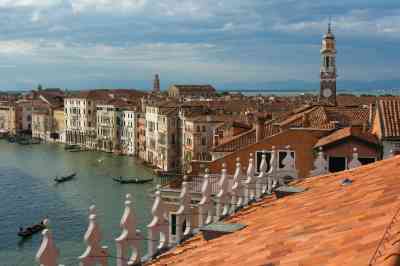 Views of the Grand Canal from T Fondaco dei Tedeschi

The best in-the-know places to visit in Venice

Best view: T Fondaco dei Tedeschi
This 16th-century trading hall beside the Rialto bridge was turned into a posh department store in 2016. Head to the rooftop terrace for a peerless bird’s-eye view of the Rialto and Grand Canal, past the domes of San Marco and campanili galore to the shimmering Dolomites in the distance. Book ahead online.
Details dfs.com

Best artisan shopping: Paolo Olbi and Paolo Pelosin
Don’t buy anything at the Fondaco; put your money into local hands. Both Paolos work with paper: Pelosin in Campiello dei Meloni, on San Polo’s main drag, marbles it before wrapping it around notebooks and boxes at his store, Il Pavone. Olbi, in his shop beside Ca’ Foscari university, binds everything from diaries to bins with his block-printed Byzantine and Venetian motifs.
Details olbi.atspace.com; Il Pavone, Campiello dei Meloni 1478

Best seafood: Trattoria al Gatto Nero
Enjoyed your meal? Thank your neighbour, who is likely the one who caught it. Burano’s Bovo family runs a truly inclusive joint where Cruise, Clooney and al dine with the island’s fishermen. Try the sublime risotto alla buranella, made with lagoon goby fish.
Details Mains from £15; gattonero.com

Best museum: Museo Fortuny
Closed after the November 2019 flood, the designer Mariano Fortuny’s old home and atelier has finally reopened and it’s as mind-blowing as ever: a 15th-century gothic palazzo lined from top to bottom with Fortuny’s opulent textiles. Don’t miss his signature Delphos dress, one of the many fashion pieces on display.
Details £9.30; fortuny.visitmuve.it

Best church: San Lazzaro dei Mendicanti
Tacked onto a hospital, this lovely, unassuming church is classic Venice. There’s a gaudy Tintoretto (depicting St Ursula and her parade of virgins) and a moody crucifixion by Veronese, but even they are outshone by the swaggering 17th-century funerary monument of Alvise Mocenigo — a baroque, sculpted depiction of his victories on sea and land , with ships lurching drunkenly.
Details Fondamenta dei Mendicanti 30122

Best budget meal: Orient Experience
Fast, cheap and delicious — there are few better budget places than this one in Cannaregio. It’s owned and staffed by refugees, and all the recipes come from their homelands. Go for the five-course platter; tea aashak (Afghan vegetable dumplings) and dajaj (chicken thighs with potato and lemon from Syria) are superb.
Details Five races £13; orientexperience.it

Best hotel: Casa Burano
You’ll see a different side of the tourist-swarmed lagoon at Casa Burano, an albergo diffuso (“scattered hotel”), where the rooms are dotted around five fishermen’s houses on the island of Burano. The sunrise over the glassy water is unforgettable.
Details B&B doubles from £120; casaburano.it