Is April A Good Time To Visit?

TS Eliot may have said “April is the cruelest month”, but that could be because he never made it to Barcelona this time of year (at least as far as we know). The city has usually said a firm “goodbye” to winter by the time April rolls around, and it starts to show its sunny side. It’s still not the height of the tourist season for a couple of months, so you can enjoy the great weather without the insane crowds of high summer – although for sure they’ll be quite a bustle of people, Barcelona has a year-round appeal as a city break destination.

The city has usually said a firm “goodbye” to winter by the time April rolls around, and it starts to show its sunny side.

Aside from its perennial attractions, there are also a slew of events that happen throughout April, so just about any time you come during the month will have some interesting stuff to go see, on top of the classic sightseeing stuff. We’ve tried to combine a bit of both on this page, and we’ve confident you’ll take up at least one of the suggestions we have listed below… you’d be crazy not to!

You might not want to pack your swimsuit (the sea is probably still too cold for a proper swim, though there are always a few brave souls who give it a go anyway), but do expect lots of nice sunshine. The average high in April is just over 19 ºC (66 ºF), though you’ll want something to wear in the evenings, which get down to around 13 ºC (55 ºF).

The chances of getting a few showers in April are a bit higher than in the rest of the year, with an average of around 8 rainy days during the month. But don’t worry even if it does rain, because there’s lots going on both indoors and outdoors.

Festivals & Things To Do

1. Sail Away on the Mediterranean 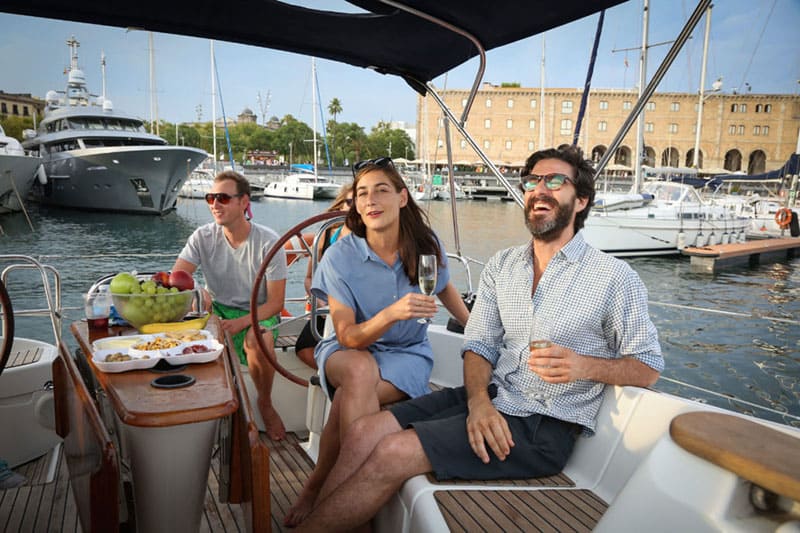 Think private cruises on the Mediterranean sound like something only for the rich and famous? While they’re definitely enjoyed by plenty of A-listers, you can get your own taste of the luxury life with a private sailing trip along Barcelona’s coast for just €350. Sail off on the deep blue sea to get some truly unforgettable views of the city skylines, made only better by the scent of the sea breeze. If hiring your own boat and skipper is a bit too expensive, check out our feature length article on sailing toursas there are some amazing options starting at just €39 per person. 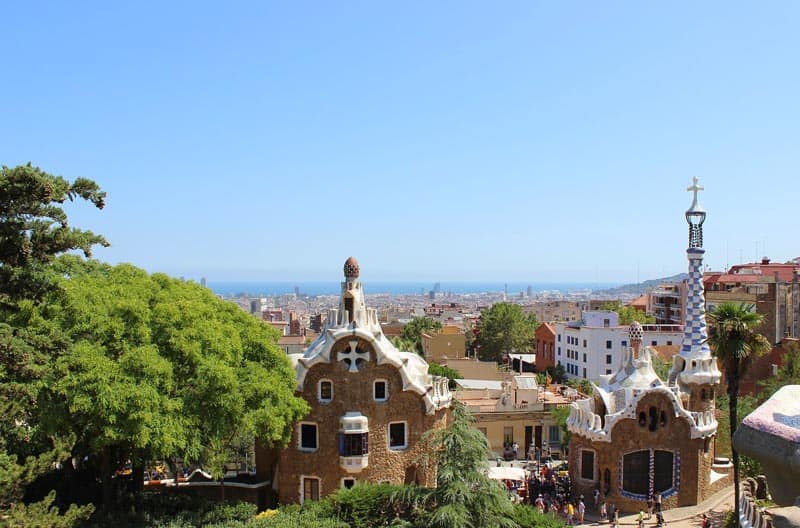 Barcelona is home to plenty of masterpieces by eccentric architect Antoni Gaudí, but none are better enjoyed on a spring day than Parc Güell. This whimsical park features some of his signature ceramic work from him, as well as a couple of great vantage points to take in sweeping cityscapes. It was designed to be a housing development, but the idea never really took off. Still, you can still see a couple of houses in the park today, including a pretty pink one where Gaudí himself lived for twenty years. If you’re planning on visiting Parc Güell, we highly recommend booking advance tickets on Get Your Guide, as the park limits the number of visitors per day and it’s not unusual for it to be fully booked. If you can’t get tickets for your trip, you can still see parts of the park for free (just not the postcard stuff).

PRO TIP: Park Guell is free to enter with certain tourist cards, such as the Barcelona Pass. If you’re planning to visit the Sagrada Familia as well (also included), then the Barcelona Pass is a very convenient option. Otherwise, check our feature article for a full comparison of city passes. 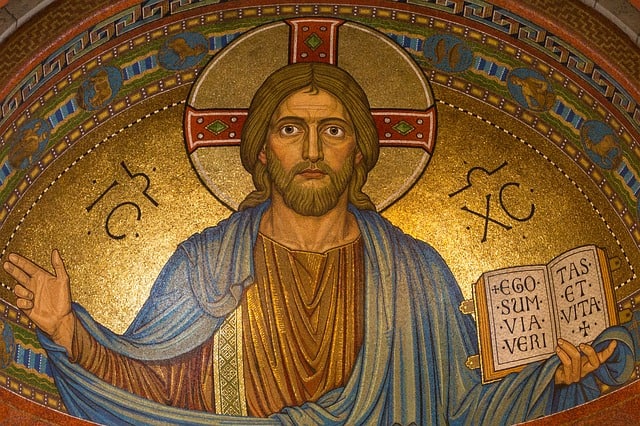 Although Barcelona isn’t home to massive Easter celebrations like in other parts of Spain, you can still see glimpses of the traditions in action, if you know where to look. A few stops take place throughout the city, generally in the historic city centre. The Raval has La Burreta procession on Palm Sunday (commemorating Jesus, entering Jerusalem on a donkey) and another procession on Good Friday. The Gothic Quarter also has one on Friday. If you’re not interested in the religious side of the holiday, you might be interested in the culinary side. Bakeries do a roaring trade around Easter and sell treats like chocolate eggs, the “mona de Pascua” cakes with their elaborate decorations, and Lenten fritters (literally “Lent fritters”, which are fried balls of dough sometimes filled with cream or chocolate). Lots of shops will be closed around Easter Sunday, so make sure to make your shopping plans accordingly! They tend to close both on Good Friday and the Monday after Easter.

Yep, you read that right! It’s three experiences in one, during this top-rated tour that gives you three very different perspectives of Barcelona. You’ll start by exploring the Gothic Quarter on your own two feet, on a guided tour with an expert guide, before you go rising high into the skies for a bird’s eye view over the city, in a thrilling helicopter ride. The tour ends with a relaxing boat cruise along the coast. You can securely book the activity via Get Your Guide, which also has a free cancellation policy. The tour is great value at €120 per person. 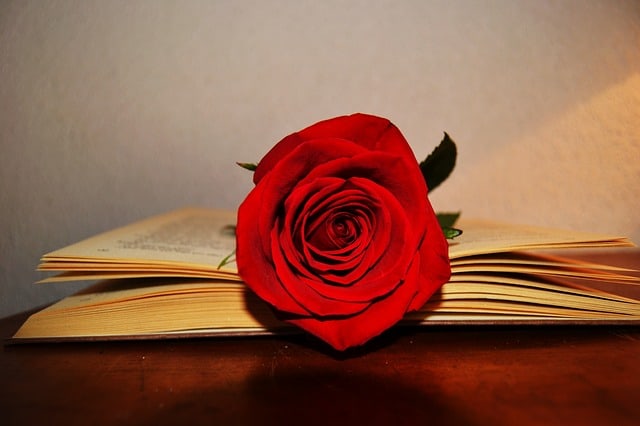 Often described as the Catalan equivalent of Valentine’s Day, the Diada de Sant Jordi (Saint George’s Day to us) is not just a romantic celebration but also a truly local one. Saint George is the patron saint of Catalonia, so the romance gets mixed in with a bit of local pride as well. It coincides with World Book Day, so traditionally men receive books and women receive roses (although today, almost everybody gets a book!). The streets fill with stalls selling books, roses, and all kinds of items adorned with the red and yellow stripes of the Catalan flag. Coupled up, or going solo, take a stroll around the streets of Las Ramblas and the Passeig de Gracia to see plenty of happy smiles, accompanied by the scent of fresh roses.

7. Take a Day Trip to Cadaqués 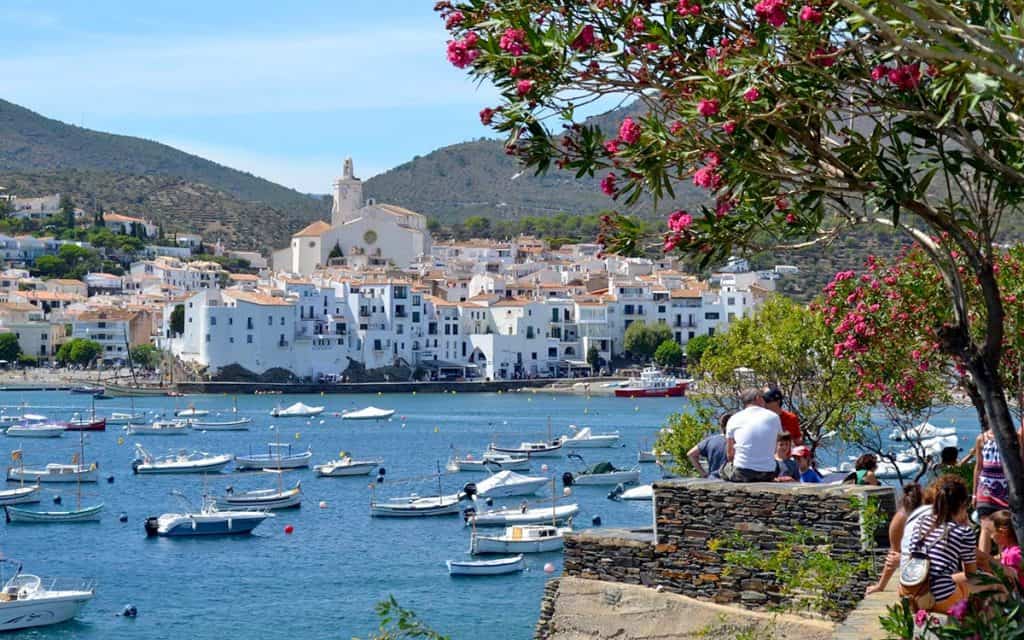 A couple hours north of Barcelona, ​​the Costa Brava is famed for its beautiful wild beaches, pretty white villages and world-class cuisine. The jewel of the coastline is Cadaqués, a small town that sits on a picturesque bay. Famous artists have summered here through its history (most notably Dalí, who had a house a short walk away; Picasso, Miró, Duchamp, and more have also passed through). The town makes a perfect place for a quick break, or as the first stop on your way up to visit other towns on the Catalan coast. It’s a bit tricky to get to via public transport, but you can hire a car, or else sign up for a tour. The one below is great value and includes a trip to the Dali Museum in Figueres. 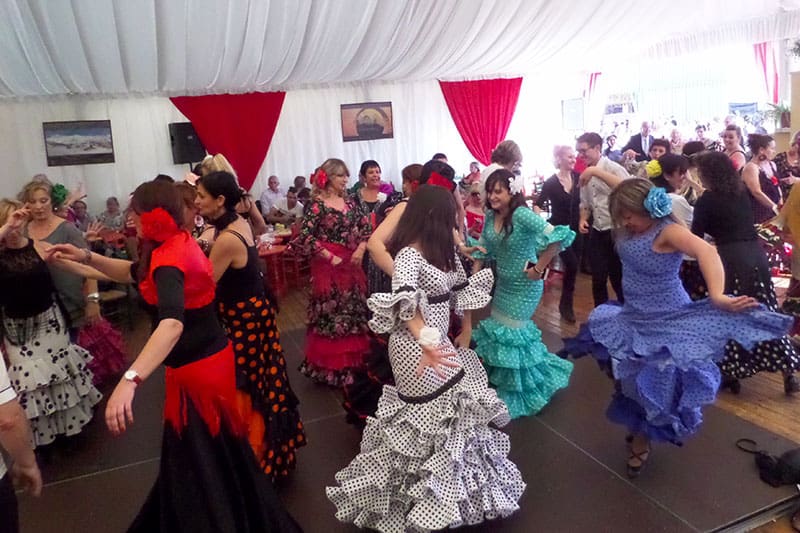 The April Fair is a week-long (or more) festival that usually takes place in the expansive Parc del Forum. The festival is traditionally from Andalusia, so you’ll see traditions from southern Spain (including traditional clothing, dances, drinks and food) along with a good dose of the fiesta spirit (concerts, carnival rides, late nights and plenty of fun). Entrance is free, so round up a group of friends and see if you can master the elaborate art of flamenco – or if not, at least have a good laugh trying. The dates for 2022 have yet to be confirmed, but the place to check them will be on the Federation of Andalusian Culture in Catalonia’s website. 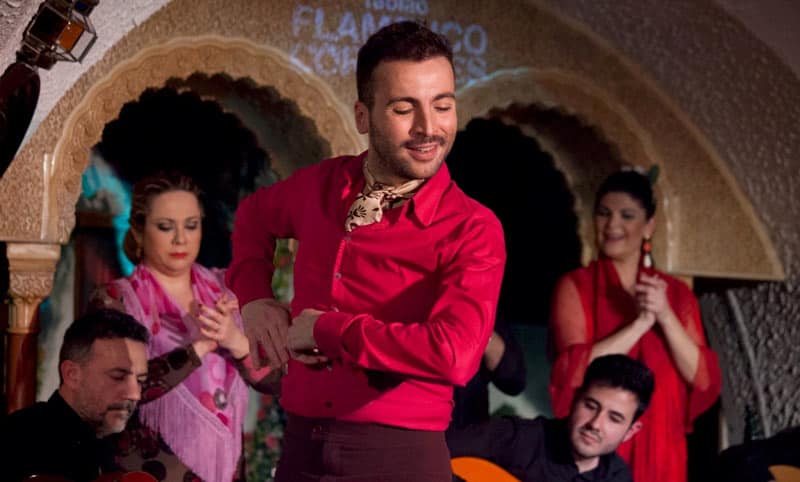 If your trip to Feria de Abril got you hankering for all things from southern Spain, then satisfy your urges with a visit to one of Barcelona’s professional flamenco tablaos. One of the best is undoubtedly Tablao Cordobes, which throws on three performances a night, together with a sumptuous Spanish buffet (or just a drink, if you’re already made dinner plans). you can buy tickets for Tablao Cordobes by clicking the purple button below. For more options, check all of our favorite flamenco shows.

10. See Sharks at the Aquarium 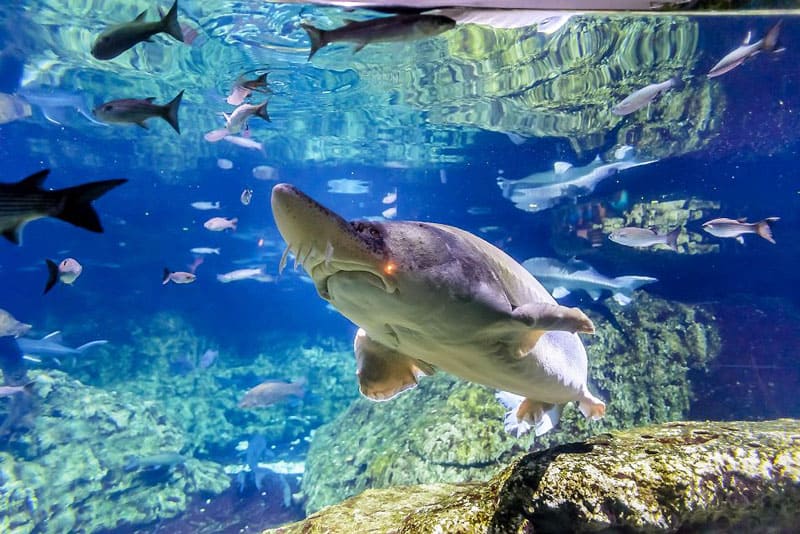 If you’re traveling with kids, or the forecast for the next few days says rain, then fear not… Barcelona’s Aquarium is an awesome attraction that showcases over 450 species of marine life, including three species of shark. Their biggest tank is called the Oceanarium and features a glass tunnel system that brings you nose to nose with some of the sea’s most impressive creatures. You can find the aquarium in Port Vell (the Old Port), towards the bottom of Las Ramblas. Given its popularity, you’re probably best off buying advance tickets on Get Your Guide to ensure you don’t get caught in a queue! 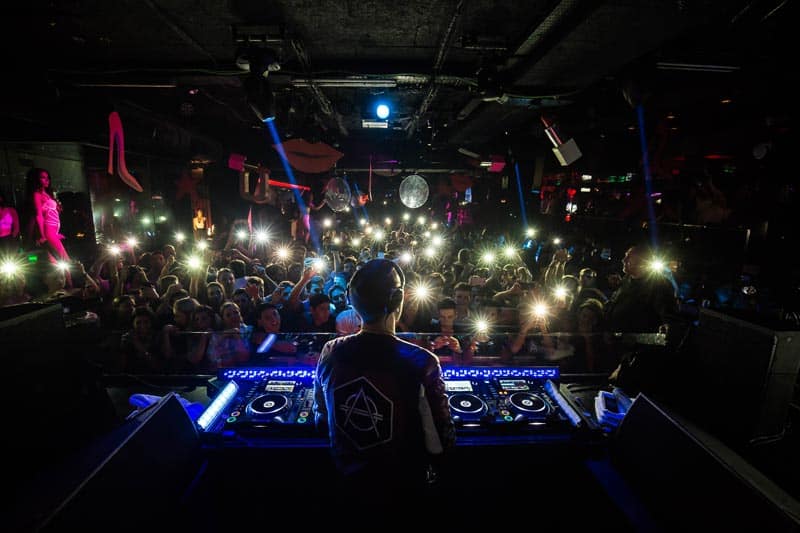 Party like a rock star, or a movie star, or a football star – whatever kind of star you’d love to be, the VIP Nightlife Tour gives you access to Barcelona’s most exclusive clubs. With stops (and drinks) in the city’s top choice of bars, you’ll be whisked around the glamorous side of Barcelona in luxury transport, skipping the queues in true VIP style. Every Friday and Saturday night starting in the spring, this is the perfect way to know you’re getting to see the premium side of the city’s nightlife with a fun group of party people. For more party options (including pub crawls and boat parties) be sure to read our nightlife guide.

12. Rock Out At Telegrocesca Music Festival 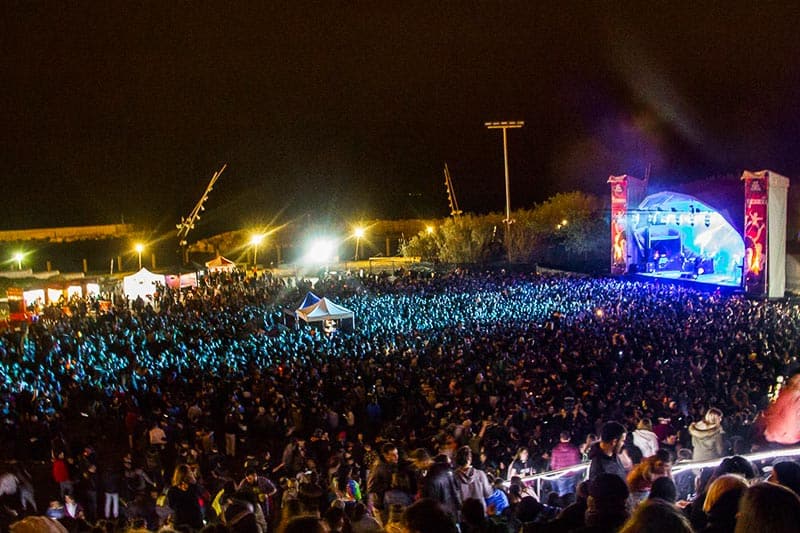 The concrete jungle of the Parc del Fòrum makes the perfect urban setting for events throughout the year in Barcelona, ​​and April sees the Telegrocesca music festival come to town This is the biggest university festival in Spain with lots of young and up-and-coming groups featured on stage. Tickets come in at student-friendly prices, starting from €17. You don’t have to be a student to go, and it can be a fun chance to hear lots of local music on the cheap. 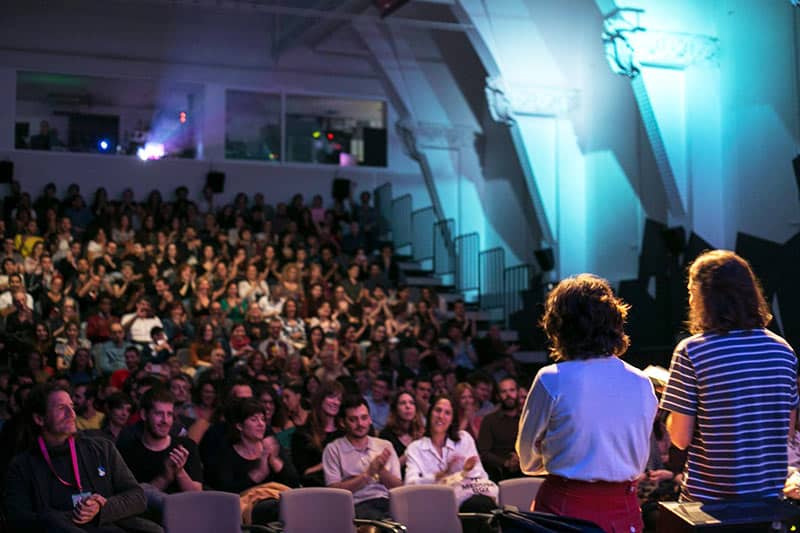 April rounds out with a film festival celebrating the best in indie film and what’s next to come in the world of cinema (think more Sundance than Hollywood productions). There are always plenty of fascinating, creative movies; after all, the “D’A” stands for “d’autor” – auteur cinema in Catalan. The website has information about which films will be showing (although, as of writing, none have been confirmed yet), but they promise “a flawless programme” – and if past editions are anything to go by, it could certainly live up to those big words .

14. Enjoy the Return of Brunch Electronik 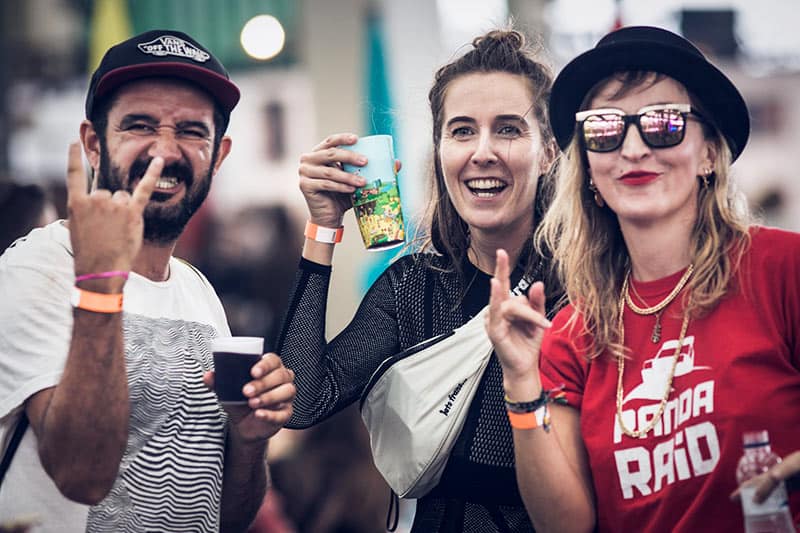 Barcelona’s got a reputation as a hedonistic city, and there are few better parties to enjoy in the spring than Brunch Electronics, which runs from mid March to June, and is in full swing during the whole of April. This open-air electronic music event brings together music lovers from around the world to dance all day long every Sunday. Despite a distinct hipster vibe, it manages to be a relaxed, fun event where you’ll see people of all ages and get to hear music from both local and international artists. Even though Sunday might sound like an odd party day, this event is so popular you’ll probably want to get tickets in advance.