Why Yas Island Abu Dhabi is THE fun-packed holiday destination (and why Kevin Hart agrees!)

Are you looking for a family friendly holiday destination with the ultimate in entertainment? One that offers luxurious hotels, world-class shopping, and delicious dining options?

Yas Island Abu Dhabi, in the United Arab Emirates, already has all this and more. And now it’s going to get even better, thanks to an exciting new partnership with globally renowned comedian and Hollywood actor Kevin Hart.

As Yas Island’s first ever Chief Island Officer, he’s on a mission to ‘Hartify’ the destination – located just 15 minutes by car from Abu Dhabi International Airport and within easy reach of Dubai.

In a video announcing his appointment, Kevin is seen cruising around Yas in a white Ferrari as he promises ‘something big’ is coming and urges fans to stay tuned on the island’s social media platforms. 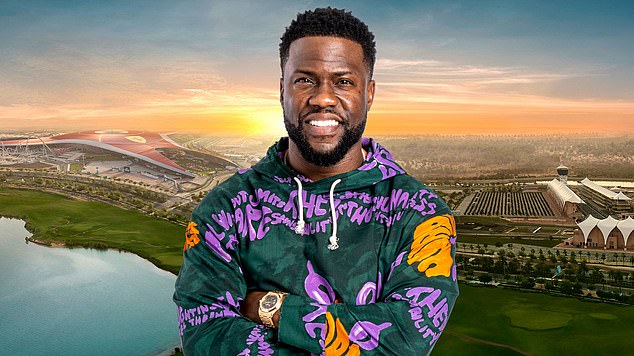 Comedian Kevin Hart has been appointed as the very first Chief Island Officer or Yas Island Abu Dhabi, in the United Arab Emirates

We then see Kevin visiting some of the destination’s award-winning attractions, including the world’s first Ferrari-inspired theme park, Ferrari World Abu Dhabi; and Warner Bros. World™ Abu Dhabi, an indoor adventure park with 29 rides featuring your favorite cartoon characters, from Looney Tunes and Scooby-Doo to Batman.

He also enjoys CLYMB™ Abu Dhabi, home to the region’s highest indoor climbing wall and a skydiving chamber measuring an astonishing 32ft wide and 104ft tall. Not to mention a quick round at Yas Links, the first true links golf course in the Middle East and a few hours at Yas Mall, a one-in-a-kind shopping and dining experience.

And as if that wasn’t enough, the star pulls in at the state-of-the-art Yas Marina Circuit, home of the annual Formula 1™ Etihad Airways Abu Dhabi Grand Prix – won last year by Max Verstappen.

‘There goes Yas Island’s first Chief Island Officer in a white Ferrari thinking he’s a big deal,’ Kevin’s voice can be heard saying, as the comedian whizzes around in the supercar. ‘Guess what, this IS a big deal.

‘The world’s most entertaining island hired me, Kevin Hart, to Hart-ify everything out here. We are going big on K-everything, because going big, that’s my middle name. Actually, it’s Darnell, but whatever.’

As he finally pulls in at W Abu Dhabi – an iconic five-star hotel and the only one in the world to straddle an F1™ race track – he signs off with the promise that ‘big things are coming’. 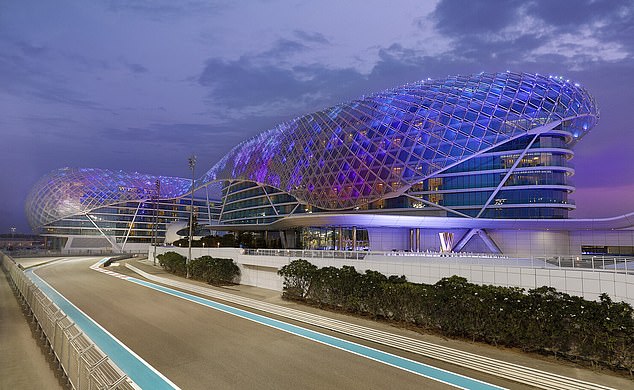 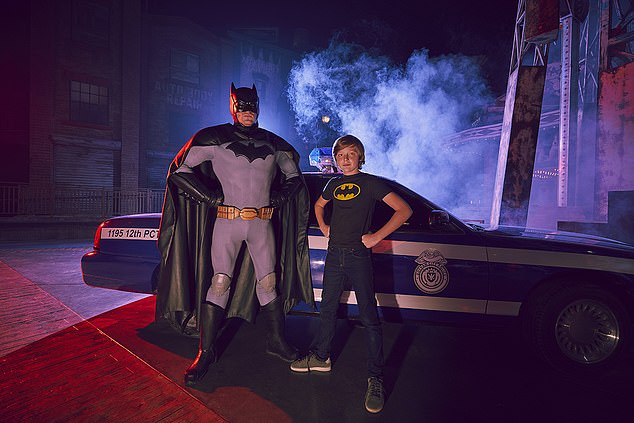 Before jumping on board Kevin was full of bravado, even worrying that the Formula Rossa wouldn’t be quite fast enough for him… But once the rollercoaster started its journey, it was a different story, with the realization of just how fast 240km /h really is dawning on the star.

Did he shed a tear or two? According to Kevin they were tears of joy… We’ll let you be the judge of that.

Yas Marina Circuit features plenty of chances to burn some rubber, from go-karting and drag racing to zooming along at over 200km/hour in an Aston Martin GT4. If fitness is more your thing, you can also go walking, running or cycling along the track.

The marina itself offers the freshest seafood against the stunning backdrop of Abu Dhabi’s pristine coastline, or the chance to go for a stroll around the dock while marveling at the fleets of superyachts. 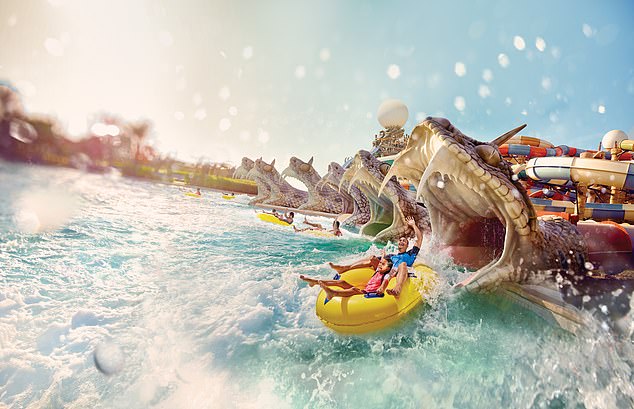 Yas Waterworld is one of the planet’s finest waterparks with more than 40 exhilarating rides, slides and experiences 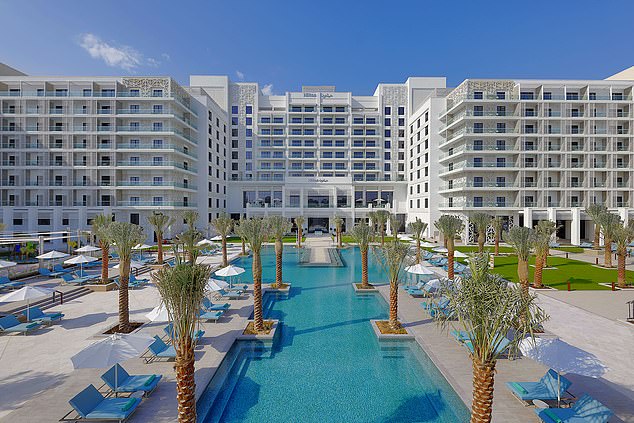 If tranquility and relaxation are more your thing, head down to the Yas Island coastline, with palm-lined swimming pools and the crystal clear waters of Yas Beach

Cartoon lovers will revel in the whimsical fantasy land of Warner Bros. World™, while Yas Waterworld is one of the planet’s finest waterparks with more than 40 exhilarating rides, slides and experiences.

Every hole features breathtaking ocean views, while the floodlit practice ranges – attached to a luxurious clubhouse with a gym, swimming pool and spa – are the perfect spots to hone your swing. 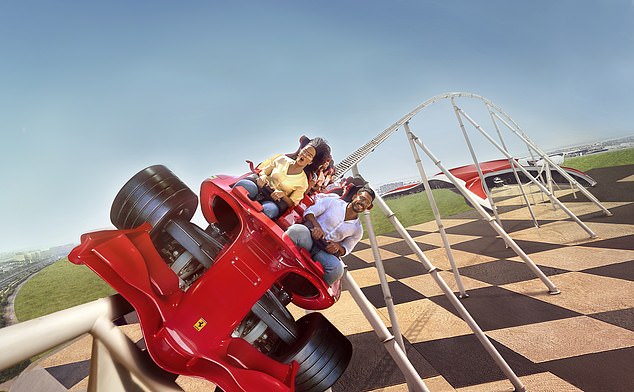 Ferrari World’s Formula Rossa is the world’s fastest ride, where you’ll be blasted 240km/h in 4.9 seconds and scale heart-racing heights of 52 meters

Or, if tranquility and relaxation are more your thing, head down to the white sands and crystal clear waters of Yas Beach, a mangrove-fringed paradise that is a haven for sunseekers and watersports enthusiasts alike.

Lovers of the seaside should also visit Yas Bay Waterfront, Abu Dhabi’s vibrant day to night destination featuring Pier71, a 1.8-mile boardwalk lined with buzzy bars where you can dance the night away.

Kevin first teased his partnership with Yas Island in August last year, when he shared a video with his followers to reveal it would be his next holiday destination.

‘Your truly will be coming that way soon. I’m excited, I’m pumped up,’ he said. ‘I’m going to hop into that world of excitement… I’m expecting to be blown away.

‘You’re doing it too big over there for me not to come and get some… Yas Island, buckle up!’ 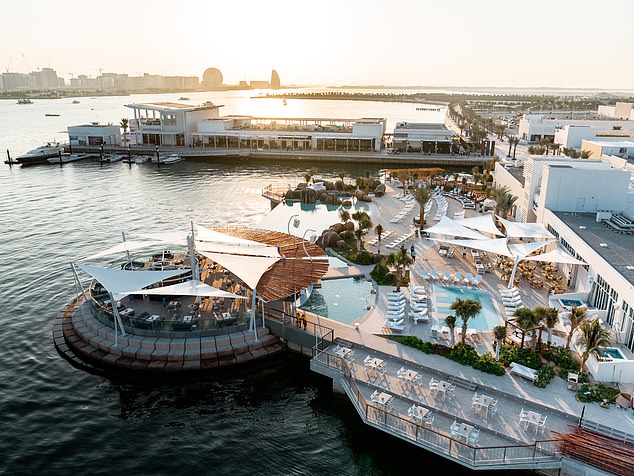 Yas Bay Waterfront is Abu Dhabi’s vibrant day to night destination featuring Pier71, a 1.8-mile boardwalk lined with buzzy bars where you can dance the night away

In the coming months, he’ll be sharing his first-hand experience as the Chief Island Officer.

Liam Findlay is CEO of Experience Hub, the trade and promotion arm of Yas Island.

‘We are delighted to see Kevin Hart take on the role of Chief Island Officer for Yas Island Abu Dhabi,’ he said.

‘As one of the most multifaceted and entertaining comics in the world, fans will get to watch Kevin Hart ”Hartify” everything on the Island, we encourage everyone to stay tuned and watch why Yas Island Abu Dhabi is ”Hart” to beat.’